Just in case you weren’t able to attend the March Mostra showing works produced by our six resident artists from January to March, we have compiled our favourites from the official photographs of the exhibition. (Photographer: Roberto Apa). You can read the individual blog published about each of the artists by clicking on that artist’s name.

The exhibition was made possible thanks to the kind support and generosity of The Arts Council of Northern Ireland, Australia Council for the Arts, Conseil des Arts et des Lettres Québec, The Incorporated Edwin Austin Abbey Memorial Scholarships and The Linbury Trust.

Our June Mostra will be taking place on Friday 17 June. 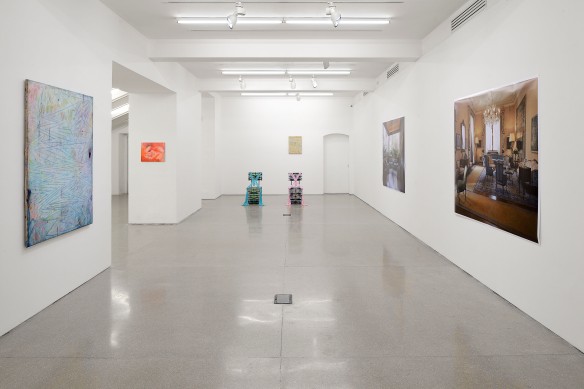 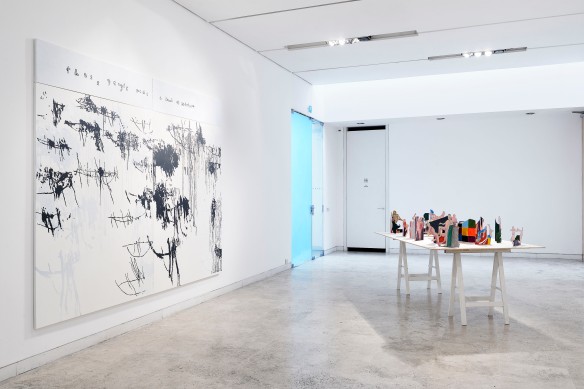 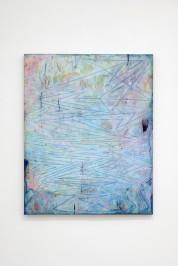 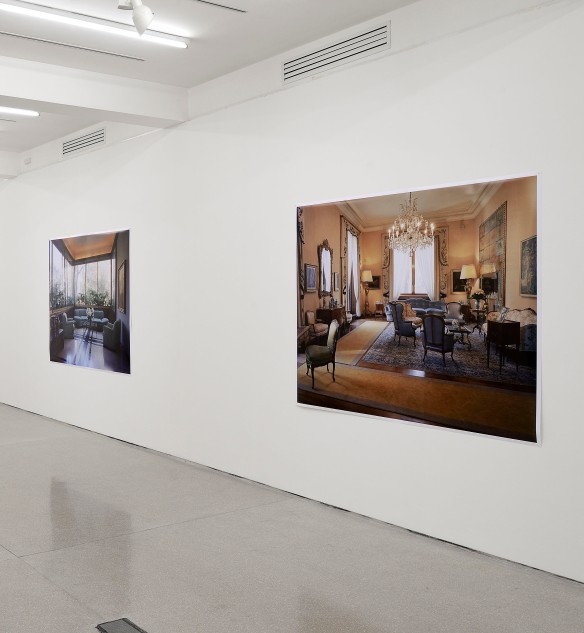 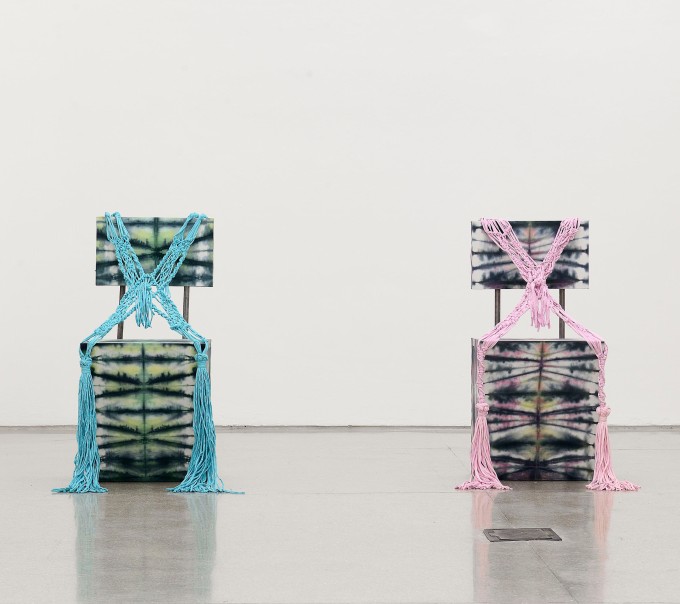 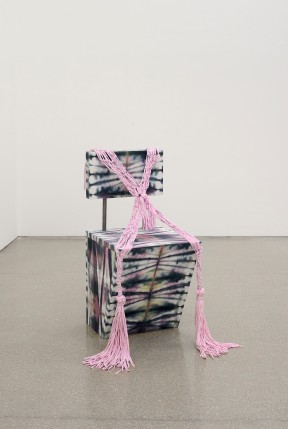 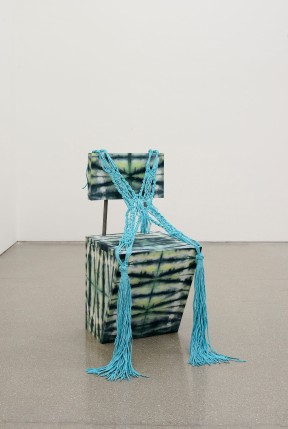 Over the next few days we will be introducing you in turn to the six resident artists who will be exhibiting in the March Mostra on Friday 18 March. Today we spoke to Michelle Ussher about her work. 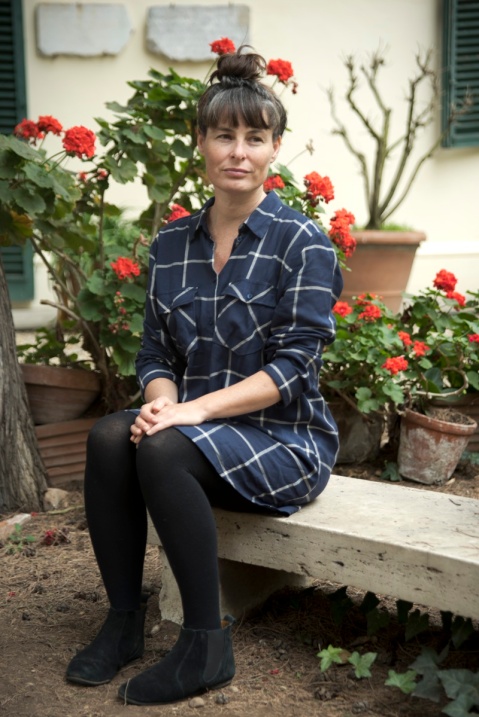 Michelle Ussher’s work is motivated by an ongoing interest in how an image, form or sound can communicate the subjective and conditional nature of perception. With a preference for oil painting, ceramics and opera her practice is concerned with reorganising the symbolic order of ‘things’, which offers a new perspective to their re-imagining and transformation. Images and narratives transcending time inform the work, such as contemporary reiterations of historic representations of intimacy, and symbolic representations of the female and sexuality.

Sound scape in particular – what inspired to do sound rather than a visual piece?

The sound piece (Nocturne) Delphine!…are you there? Was made at the beginning of my residency, for the exhibition The Green Ray at Wilkinson Gallery in London curated by Andrew Hunt. The Green Ray is a film by Eric Rohmer based on the Jules Verne book by the same name. I knew the film really well as I’ve watched a lot of Rohmer films for their dialogue as they’re usually about women, and I write stories to create the narratives and images in my work.

Looking at the film and the book it became apparent the two female protagonists are quite different. You assume the nineteenth-century fictional character Helena would be less liberated than Delphine from the 1980s film, yet this wasn’t the case.

The Green Ray as an idea is an actual scientific phenomenon, turned into a romantic notion that both the author and film director projected onto the female protagonists. The idea is that if you watch the sunset with your lover, and see the last ray of light, which is green, you will have a vision of your destiny with this person.

Verne’s protagonist, Helena uses the notion of the green ray and the pursuit of it, to defer marrying a suitor – in a similar way that Penelope, Ulysses’ wife, puts off her potential suitors by unpicking her tapestry each night. When the opportunity arises to finally see the green ray, Helena is in a cave getting off with her new lover, as she can find love without it.

Rohmer’s Delphine is the opposite, she is possessed by the green ray, and all romantic notions such as séances, star signs, and synchronicity. Rohmer paints her as pathetic, lost, in search of love to solve all her problems. This really annoyed me, and gave me the idea of creating a new dialogue between Helena and Delphine exploring contemporary feminine desire, in the form of a spatial séance in sound. In the sound piece Delphine contacts Helena to talk about boys and sex, just like any two girls today. The actual transcript for the dialogue is taken from my WhatsApp conversations with a friend discussing sexual adventures from Tinder and Grindr. Working with the composer Huw Hallam, the text was divided into parts representing stages of falling in love, based on texts I had read by Adam Phillips and Darian Leader. The dialogue fell under different categories titled projection, objectification, sex and emotion. The sound piece begins with the projection stage, moving to objectification and ends in a verbal and sonic mess of sex and emotions. Each stage is punctuated by varying shades of green, and the calling out of their names as if they are different men.

The sexual element that you mentioned within the women’s dialogue – does that also appear in your paintings?

Yes, my ideas for paintings at the moment come from the same narratives: from films, novels and myths, and thinking about why and how certain ideas, often about women, have been projected in particular ways – how I can be playful with these perspectives. There are certain narratives you can follow from Greek to Roman to Christianity right up to contemporary cinema. I revise these narratives, create new ones to make fun of them, and find a new position to see them differently. Most of my work is concerned with romance, intimacy, and sex. Each body of work has its own colour palette, using a selection from Josef Albers series Homage to the Square. I like the idea of taking the work of a male modernist artist and making it my own, claiming a part of painting history for myself and female artists. The Green Ray works were both made as dedications to two Polish female artists, Agneizka Brezanska and Paulina Olowska, and the piano piece and title for (Nocturne) Delphine!…are you there? Is from Nocturne in B-Flat Major by Maria Szymanowska, a female Polish composer.

Since I arrived at the BSR I’ve been reading Julia Kristeva’s book The Severed Head which looks at representations of the severed head through painting. After reading her essay about Medusa, I began researching the Roman version of the myth, and looking at how she is represented in painting, sculpture and fountains. She is depicted as an ugly dangerous woman, with brave men cutting her head off. She’s symbolic of female genitalia, and the severing of her head could be understood as female castration. I started thinking about her curse, one based on female jealousy, where the sight of her would turn you to stone. If the focus of the curse is shifted to Medusa’s perspective it becomes very sad, as it means she can never look at anyone she loves. Greek depictions of her seem more complex, as a woman so beautiful she is terrifying.

A marble fountain depicting her was named The origin of coral which refers to the idea of hair turning hard, to stone. The title reminded me of Courbet’s painting The origin of the world, depicting a lovers point of view of female genitalia. The same view is a very common angle used in contemporary pornography, with much less sensuality. Depictions of Medusa often have her in a frozen state of screaming, mouth agape, not dissimilar to an erotic expression of a woman in orgasmic climax. From this I’ve begun thinking about the connection of women’s pleasure and male fear. I’ve been looking at a lot of pornography, how female pleasure is represented for heterosexual men, and what it might look like without the male gaze, if it was for the mirror, the object that allows Medusa to look at others, with intimacy, for her own pleasure.

Do you think there is an element of being in Rome, which has influenced your work or are these ideas that you came to the BSR with?

I came with the idea of knowing I wanted to research narratives that transitioned from Greek to Roman myths. I knew I needed to physically be in Rome, where contemporary reiterations of these narratives co-exists with their historical ones, and see if I could find something about how they have morphed into the present that could offer something to my work which I couldn’t gain from afar. I didn’t know that I was going to work on Medusa, that happened when I was reading the book and looking at art here.

What’s great is that this work, started at the BSR, will continue, it won’t just be something I look at in these three months. I’m sure there will be a sound piece that comes out of it, they usually come later, and I’ve had more ideas for paintings already.

Michelle’s work will be exhibited alongside the other five resident artists in the March Mostra; open 16.30-19.00, Saturday 19 March until Friday 25 March 2016.