It is with great satisfaction that the BSR can announce the completion of the Sustainable Building Project.  Several years of planning went into this project, and they have paid off; we have completed on time and under budget, and have even managed to include some additional works within the period.

The key aim was to provide a residence which was fit for purpose for its future, and we believe that the improvements have done just that.  As the Director’s Garden comes back to its former glory, we look forward to welcoming you back to the BSR.

This project would not have been possible without the support of our sponsors and donors and we gratefully acknowledge their help and generosity.

However, there are always new projects!  First, we were unable to include the refurbishment of the bedroom windows, and so we are now launching an appeal to address this.  Each window can be removed, retrofitted with double glazing and its shutters restored and repainted for £3000.  We already have three windows sponsored, and this is a brilliant opportunity to play your part in supporting the future of the BSR.  Every restored window will bear the name of its sponsor.  Please get in touch with Development Director Elizabeth Rabineau if you would like to know more.

Second, the Sustainable Building Project was just one part of our Second Century Campaign.  The first students entered the current BSR in 1916, and a century on the BSR has never looked better.  But it is essential that we find new support for the artists and scholars whose presence at the BSR is our key mission. So over the coming months, we will be rolling out a series of opportunities through which you can help the BSR to move confidently into its second century!

Here is how the BSR looked roughly a century ago when the Residence was first being built (images courtesy of the BSR Photographic Archive).

‘Exterior view of the east wing’.

The Library as seen from the foyer.

‘View of north wing from cortile’.

The artists’ corridor with building works in the background.

Modestly described as ‘north wing extension’ in our Archive catalogue, this might be more familiar to most as our artists’ studios.

And here are the studios a little later in 1920.

and those private individuals who contributed towards the project.

Phase two of the Sustainable Building Project has seen the emptying of the old Library basement to allow essential work to improve humidity control, to ensure the long-term conservation of our important collections, including periodicals, and to reduce our annual energy costs.

The books that have been moved out of the 1960s Library basement filled over a kilometre of shelves and will be stored off-site until the building work is complete in November 2015, while the shelves are temporarily filling the entrance hall.

The Library will still open again as usual on 1 September and will close only for 3 weeks from 15 November to 6 December inclusive to allow us to put everything back in place.

If you would like to use the Library do consult URBiS (www.urbis-libnet.org), our new online catalogue, which includes the collections of five other research Libraries in Rome and will help you to plan your visit in advance.

All of this is part of the BSR’s commitment to supporting researchers in the UK and the rest of the world. Check back here and on Twitter and Facebook for further updates over the coming months.

On the façade awaiting removal 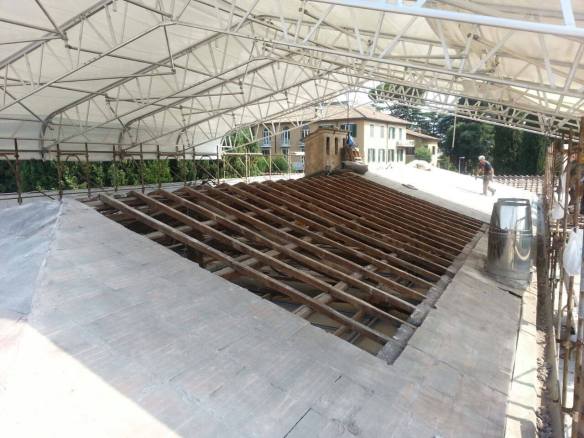 The roof above the ’30s corridor’ gets some much-needed attention

The first phase of our Sustainable Building Project (SBP) is underway, and we wanted to share our progress. For your delectation, we have condensed several days’ work into under a minute’s worth of footage — from the monumental removal of the tennis net(!) to the scaffolding going up and work on the roof getting started.

The scope of the project is big, touching most parts of the structure, from the roof down to the old Library basement. It will result in significantly reduced energy and maintenance costs, and a dry and better-controlled climate for the Residence and Library.