In 1916, Assistant Director Eugenie Strong and architect Ernest Cormier briefly took up residence in the current BSR. We know a little about these early days in the building, which was by no means as complete as it is now. The east wing was missing (and not completed until the 1930s).

One of the studios was the common room, and housed Thomas Ashby’s [Director 1906-25] Piranesi prints in a special cabinet. Part of the Director’s flat was the temporary kitchen. Ashby himself was at the Italian front as a volunteer ambulance driver; most of the thirty-seven men associated with the BSR, including its Italian staff, were also caught up in the war. 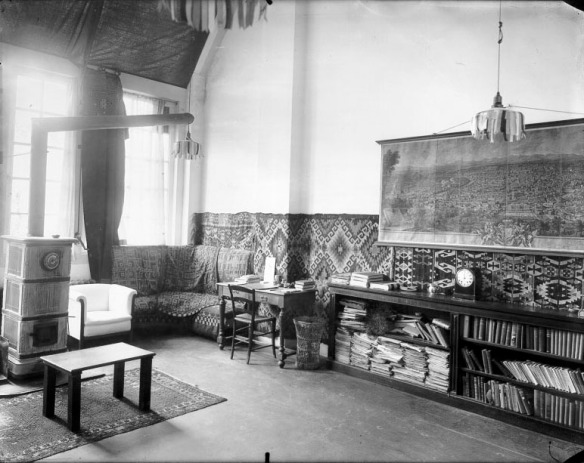 But the building was ours, for all that it was incomplete, and its first two residents were remarkable figures. Strong — an ebullient socialite, an expert on Roman art, polymathic, and profoundly international with contacts across Europe — is relatively well known. Her immense collection of commercial photographs of art and sculpture from several periods remains an untapped part of the BSR archive; and work on her large collection of postcards merits external funding. 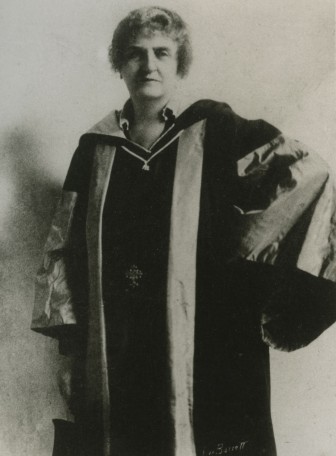 Ernest Cormier stands for another aspect of the BSR. He was a Canadian architect, and designed not only the central buildings of McGill University but also Canada’s Supreme Court in Ottawa. Our Commonwealth roots and our commitment to architecture, and to excellence, come together in the figure of Cormier.

Supreme Court of Ottawa, designed by Ernest Cormier – the first student to take up residence at the BSR in 1916 (Photo: Wikipedia)

It is fitting to remember Cormier as we also think this year of our departed and much-missed friend, Francesco Garofalo, who himself spent several years in Canada and who gave so much to the BSR. Francesco and his wife and fellow architect Sharon Miura worked on the extension of the BSR at the beginning of this century, including the Sainsbury Lecture Theatre, where his posthumous book of essays was presented earlier this month.

Speakers at the launch of Whatever happened to Italian Architecture? (Photo: Antonio Palmieri)

A century on from its beginnings, the BSR’s building has never been in better shape. Thanks to my predecessor’s extension, and the recent Sustainable Building Project refurbishment programme — which Sharon Miura project-managed, with architects Studio Amati, engineers ARUP, and building contractor LO.MA — our artists are now showing their work in a temperature- and humidity-controlled gallery, our Library periodicals are in a fully refurbished basement, and we are constantly driving down energy costs. 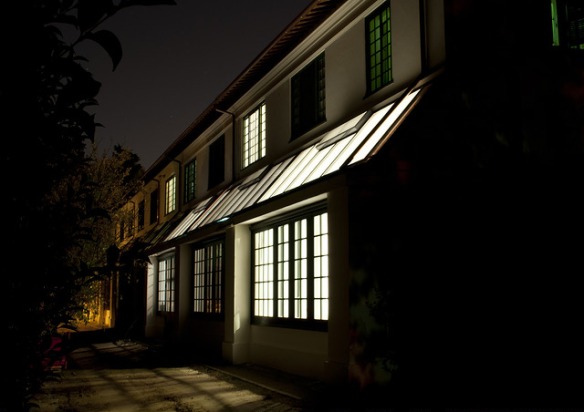 To celebrate this, we were proud and honoured to receive a visit from our President, HRH Princess Alexandra, who launched the next phase of our Second Century Campaign. We are working to create a stable and sustainable basis for our future. We hope that as many of our members as possible will visit us next year and that all our existing friends, and many new ones, will help us continue the traditions of internationalism and excellence which have characterised the first century of the BSR and will serve us well in our second.

As we wrote in our blog last week, August represents a change of pace for us. The Library has completed its annual ‘checking’ and inventory of 110,000(!) books and periodicals, as it prepares to re-open on Monday 29 August. August is also the time for Maintenance Officer Fulvio Astolfi to undertake any major renovation works needed for the recommencement of our events programme and the arrival of the new award-holders.

Last August, Fulvio’s attention was focused mainly on the Sustainable Building Project, which was successfully completed earlier this year .

This project was a large undertaking but is only the most recent of the makeovers that the building has gone through — since its beginnings as the British pavilion for the 1911 exposition in Rome — to become a residence fit for purpose for the hard creative work that we support. 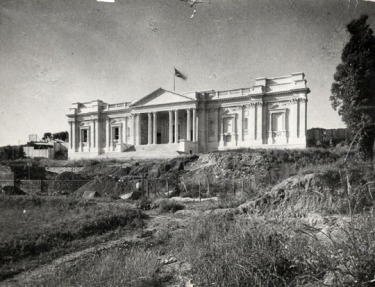 The BSR as it stood over a century ago — as nothing more than a façade.

Along with these larger projects the BSR has always had a team of committed staff members to look after the building on a day to day basis. With the help of BSR Archivist Alessandra Giovenco we found this photograph (which some of you may recognise from the BSR’s One Hundred Years centenary volume) of Carpenter Pio Fiorini, Fulvio’s previous incarnation!

Pio Fiorini (left), joined the BSR on 10 March 1946. He is pictured with Giuseppe Fioranelli (right), who eventually took over Pio’s position following his retirement.

The picture shows the two outside on the tennis court, but the carpenter’s ‘office’ was the space underneath the front steps of our grand façade — since transformed into the Gallery during the building project of 2000.

From carpenter’s studio to exhibition space …. the Gallery under construction during the building works of 2000 that also saw the creation of the Sainsbury Lecture Theatre.

During the 2000 and 2015 building projects, the successors of Pio and Giuseppe, Maintenance Officer Fulvio Astolfi and Domestic Bursar Renato Parente have excelled in their commitment to to supporting the activity of our residence. Their tireless commitment to the Sustainable Building Project — and ongoing maintenance of the BSR building — has been immeasurable. 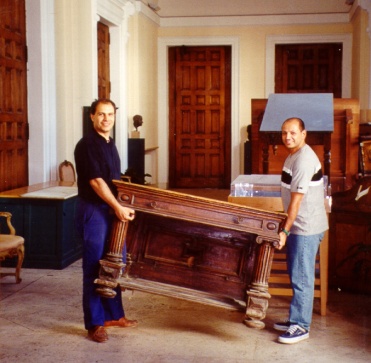 Fulvio Astolfi and Renato Parente during the building works of 2000. Photograph by Sarah Hyslop. 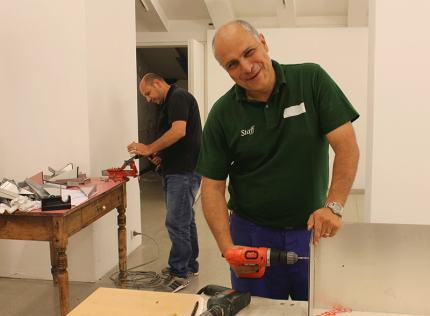 Renato and Fulvio in 2015 helping to prepare the Gallery for an exhibition. Photograph by Sophie Hay.

As we continue our work behind the scenes to prepare for the new academic year, we look forward to telling you about the work, ideas and discoveries, which the BSR will be home to in 2016-17.

If you would like to see more images from the Sustainable Building Project take a look at our blog celebrating its completion.

Images courtesy of the BSR Photographic Archives unless otherwise stated.

It is with great satisfaction that the BSR can announce the completion of the Sustainable Building Project.  Several years of planning went into this project, and they have paid off; we have completed on time and under budget, and have even managed to include some additional works within the period.

The key aim was to provide a residence which was fit for purpose for its future, and we believe that the improvements have done just that.  As the Director’s Garden comes back to its former glory, we look forward to welcoming you back to the BSR.

This project would not have been possible without the support of our sponsors and donors and we gratefully acknowledge their help and generosity.

However, there are always new projects!  First, we were unable to include the refurbishment of the bedroom windows, and so we are now launching an appeal to address this.  Each window can be removed, retrofitted with double glazing and its shutters restored and repainted for £3000.  We already have three windows sponsored, and this is a brilliant opportunity to play your part in supporting the future of the BSR.  Every restored window will bear the name of its sponsor.  Please get in touch with Development Director Elizabeth Rabineau if you would like to know more.

Second, the Sustainable Building Project was just one part of our Second Century Campaign.  The first students entered the current BSR in 1916, and a century on the BSR has never looked better.  But it is essential that we find new support for the artists and scholars whose presence at the BSR is our key mission. So over the coming months, we will be rolling out a series of opportunities through which you can help the BSR to move confidently into its second century!

Here is how the BSR looked roughly a century ago when the Residence was first being built (images courtesy of the BSR Photographic Archive).

‘Exterior view of the east wing’.

The Library as seen from the foyer.

‘View of north wing from cortile’.

The artists’ corridor with building works in the background.

Modestly described as ‘north wing extension’ in our Archive catalogue, this might be more familiar to most as our artists’ studios.

And here are the studios a little later in 1920.

and those private individuals who contributed towards the project.

We are now a little more than half-way through the Sustainable Building Project. In (sometimes literally) concrete terms, this means that the roof work on the east and north wings of the building is now complete, and the artists’ studios have new windows and skylights. Further good news is that new hot water heaters have been installed.

Below ground, work continues on remedying the 1960s Library basement, so our periodicals will also have a dry future.

The builders have already begun work on the west wing roof, so we are on track to have a watertight building by the end of the year. For all those former residents who have suffered the occasional leaky ceiling, cold shower or unheated room, this news should give great comfort.

Though not part of our Sustainable Building Project, we have been inspired to use this period of transition to complete two small but important projects. First, we have refurbished the Margary Room in Camerone (archaeology department), creating a new home for the Archaeology Archive and additional study space. Second, we have refreshed the BSR kitchen with new and energy-efficient equipment.

Phase two of the Sustainable Building Project has seen the emptying of the old Library basement to allow essential work to improve humidity control, to ensure the long-term conservation of our important collections, including periodicals, and to reduce our annual energy costs.

The books that have been moved out of the 1960s Library basement filled over a kilometre of shelves and will be stored off-site until the building work is complete in November 2015, while the shelves are temporarily filling the entrance hall.

The Library will still open again as usual on 1 September and will close only for 3 weeks from 15 November to 6 December inclusive to allow us to put everything back in place.

If you would like to use the Library do consult URBiS (www.urbis-libnet.org), our new online catalogue, which includes the collections of five other research Libraries in Rome and will help you to plan your visit in advance.

All of this is part of the BSR’s commitment to supporting researchers in the UK and the rest of the world. Check back here and on Twitter and Facebook for further updates over the coming months.

On the façade awaiting removal

The roof above the ’30s corridor’ gets some much-needed attention

The first phase of our Sustainable Building Project (SBP) is underway, and we wanted to share our progress. For your delectation, we have condensed several days’ work into under a minute’s worth of footage — from the monumental removal of the tennis net(!) to the scaffolding going up and work on the roof getting started.

The scope of the project is big, touching most parts of the structure, from the roof down to the old Library basement. It will result in significantly reduced energy and maintenance costs, and a dry and better-controlled climate for the Residence and Library.