An interview with Paul Becker, our January-March 2020 Abbey Fellow in Painting, in which he speaks about the works he produced during his three-month residency at the BSR.

Image: Skirt of ‘Toilette of Salomé II’
Oil on canvas, 2019. Courtesy of the artist

.Has anything inspired a shift in your artistic practice since your arrival to Rome?

There are lots of things I have been thinking about but more to do with the wider cultural context of Italy. Perhaps not the ancient world or the Baroque but I have always been interested in Italian history and certain cultural events, certain films, novelists, certain artists. More generally I have been interested in the fin de siècle, in end of the century artists and writers and the feeling, the atmosphere present within that time, and how there are obvious correlations with what is happening now in the world: a feeling that we are all slightly doomed, and that society is approaching a crisis, just as people felt just before the beginning of the 20th century (and were proved right). I have been looking at Medardo Rosso, Visconti’s Death in Venice, decadent art, symbolist art, Beardsley, Spilliaert, Max Klinger. But none of these things are referenced specifically, I am just looking and thinking about them. Talking to the props makers at Cinecittá was quite extraordinary. All these histories of film and time, jumbled up and reused: a bust from Spartacus being recycled for Gladiator. A chandelier from Casanova or Salò dusted off for a Gucci shoot.

From the props dept at Cinecittà. Chandeliers from Visconti’s Death in Venice and Pasolini’s Salò. Photograph by the artist

You’re a painter, but you’re also a musician and a writer. How do these practices influence one another?

There is a similar approach when I try and make music: a freedom that comes from not really knowing what I’m doing, or where I am going. Making something from nothing. I’ve not got any recognisable skills as a musician but the band I play in (War Dr with Luke McCreadie) still manage to produce good things through our complete lack of virtuosity. So, yes, in that way it is connected to my paintings. As for the writing, I suppose I have more idea of structure, or strategy for how it could function. Perhaps editing is closer to painting? Certainly, the painting and the music have more similarities in locating the subject, the content, the work itself, in the process of trying to formulate it: like writing a poem and the making of the poem becomes the work. I don’t want to impose too much, I am looking for clarity but that doesn’t mean I want things to be explained or to be specific, not in music, not in writing and especially not in painting. It is more about locating an uncertain feeling, an atmosphere, something I cannot explain that is not to do with inspiration, with research or specific references but that is really important to me to try and have in the world. 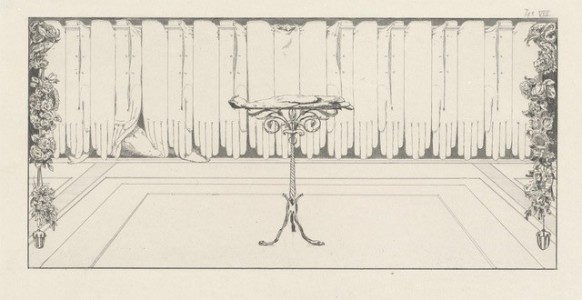 Image: Max Klinger Repose from Paraphrase on the Finding of a Glove (1881) 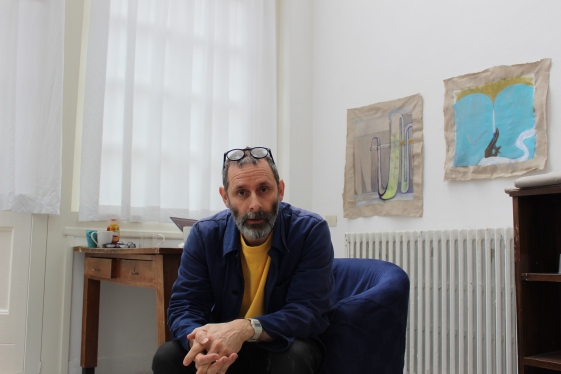 The artist in his studio at the BSR. Photo credit: Viviana Calvagno