John Osborne gives us a glimpse of one of the most beautiful cities in the world, through the lens of Neoclassical sculptor Antonio Canova and the church of Santi Apostoli.

One of the delights of undertaking research in Roman churches is that you continually discover wonderful objects or paintings which bear absolutely no relationship whatsoever to the subject of your study. Take the church of Santi Apostoli, for example, about whose medieval scriptorium I am currently writing a paper for a conference entitled ‘Roma X secolo’ to be held in early April. I needed to check that a sixth-century relic container was indeed still housed in the church’s 19th-century crypt, so on a sunny Saturday morning I walked over from the BSR, my steps taking me most happily through the Borghese Gardens to the Pincio, down the Spanish steps and past the Fontana di Trevi. Sure enough, it was still there, more or less exactly where it had been rediscovered in 1873. 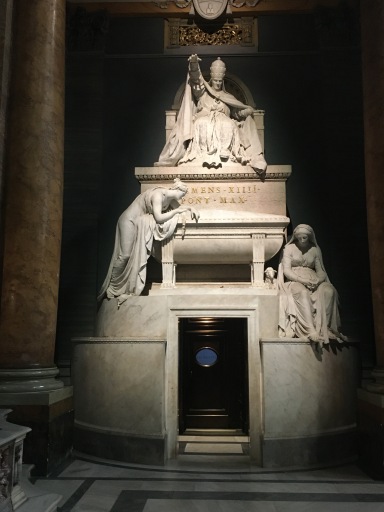 What I had foolishly forgotten was that this church also houses one of the great early works of the Neoclassical sculptor, Antonio Canova: his tomb of Pope Clement XIV (1769-1774), completed in 1787. In the second half of the 18th century the great age of the Baroque, with all its gaudy splendour, theatrical exuberance, and decorative excesses, was in the process of being giving way to a new taste for more simple refinement and more sober expression … and here, not much more than a stone’s throw from the trompe l’oeil illusionism of the ceiling of Sant’Ignazio, Canova, who had only recently arrived in Rome from Venice, charted a new course in funerary monuments. It was one that would instantly capture the zeitgeist of his day by evoking the spirit of the ancient world in its clean lines, reduced forms,  and classicizing mourning figures. The pendulum of taste was in the process of swinging, aided and abetted by the archaeological discovery of ancient monuments and statuary, including the discovery and excavation of sites like Hadrian’s Villa at Tivoli, and of course Pompeii. No energetic dynamism here. No insistence on throngs of figures when three will happily suffice. If it ain’t baroque … 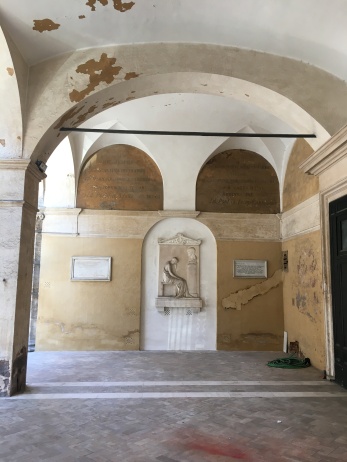 But even this monument seems a bit over-the-top in comparison to Canova’s other work at SS. Apostoli, one that rarely gets any mention in the guidebooks, and nary a sideways glance from visitors to the basilica: the funerary stele of his friend and fellow refugee from the Veneto, the artist (engraver and ceramicist), excavator, and antiquities dealer, Giovanni Volpato (1735-1803), located in the narthex porch. Completed roughly two decades later than the papal tomb, in my estimation this is the real masterpiece of Neoclassicism, and indeed it has long been my favourite of Canova’s many monuments. You will not find a better tribute to the classical value of pietas and the wistful remembrance of loved ones who are no longer with us. Che bella! 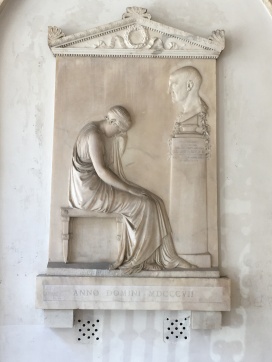 Rome is full of such little nuggets, and from every age of European history stretching back some 2500 years. There is no other city like it anywhere in the world.

John Osborne (Distinguished Research Professor, Carleton University, Ottawa; and Honorary Research Fellow, Courtauld Institute of Art, London) has been a visitor to the BSR in every year since 1976.  He held a Rome scholarship in 1978-9, a Balsdon fellowship in 2018, and was elected an Honorary Fellow in 2006. He has published regularly in the Papers of the School, and his forthcoming book, Rome in the Eighth Century: a history in art, will be published by Cambridge University Press in the summer of 2020 in the BSR series.