What really came to the fore at this month’s international congress on the protection of cultural heritage in conflict is the importance and obligation of sharing and building networks of knowledge.

While the focus was on World War II, participants from prestigious European and American Museums learned that they weren’t the first to experience the necessity of protecting their collections before, during and after a conflict ­- Spanish public and private institutions had been forced to address this issue during the Spanish Civil War (1936-39).

The event marked the 80th anniversary of the end of the Spanish Civil War and, at the same time, celebrated two centuries since the foundation of the Prado Museum. Professor Arturo Colorado Castellary, and the research team at the Prado, have collated pieces of history from different sources, mostly Spanish – but they were keen to discuss this topic from various perspectives, and were eager to invite external contributors to participate in the debate. 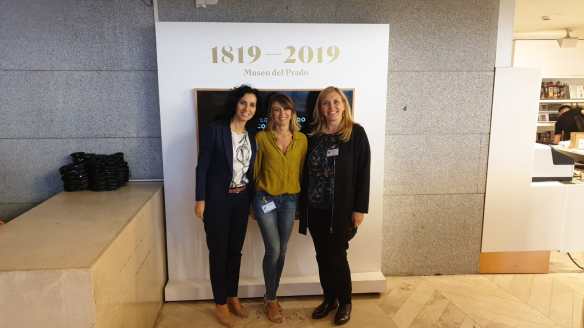 Our paper was part of the session panel centred on the experiences of foreign institutions such as the Louvre, the Metropolitan Museum of Art, the Staatliche Kunstsammlungen Dresden and the National Gallery, London. Within this context we told the story of the BSR collections to a wider audience.

US troops setting up artillery in the Valle Giulia with the British School at Rome in the background. 5 June 1944. Courtesy National Archives (NARA), photo no. SC 190223-S.

Between the summer of 1943 and the end of 1945 a special Anglo-American army division was operating in Italy with the aim to protect and salvage the Italian cultural heritage threatened by the war. The Monuments, Fine Arts and Archives Sub-Commission (MFA&A S/C), which included prominent  Anglo-American museum directors, art historians, archaeologists and scholars wearing the army uniforms of their countries, was established not only to indicate the damage, loss, or survival of historic monuments and collections but also to create a complete photographic record of its activities in the field.

Major Paul Gardner photographing the Tomb of Robert of Anjou, in the church of Santa Chiara, Naples (1943) (attributed to A. S. Pennoyer)

Palestrina: J. B. Ward-Perkins and civilian personnel among the ruins of the Temple of the Fortuna Primigenia (photographer unknown)

Ancona: Basil Marriott in storehouse for books (photo by J. B. Ward-Perkins)

A large set of photographs as well as the reports and documentation produced by the MFA&A S/C were deposited in the British School at Rome Archives thanks to the dual role played by John-Bryan Ward-Perkins as BSR Director (1945) and Director of the MFA&A S/C in Italy (July 1945). They therefore represent an outstanding source of data to inform and build current best practices with regard to cultural heritage. 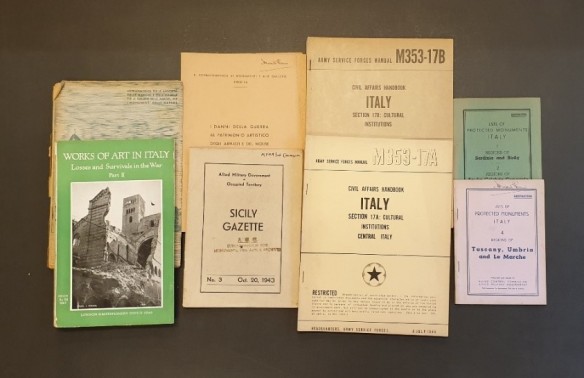 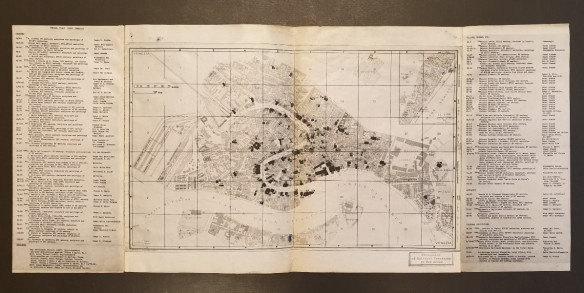 These images, linked to field reports by MFA&A officers during their surveys, help to visually restore the destruction scenario and the scale of the efforts that were made to recover the cultural patrimony affected by World War II. 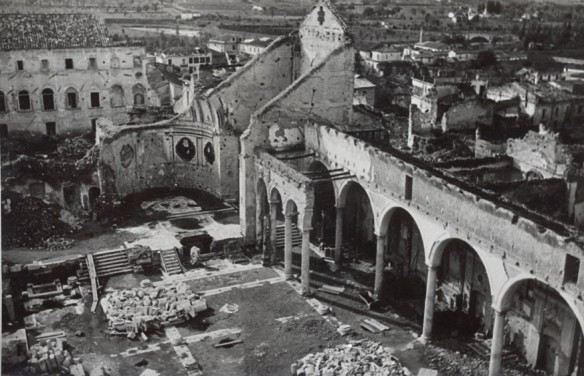 Naples: Santa Chiara, immediately after the fire caused by the bombings of 4 August
1943 (photo by Istituto Luce) 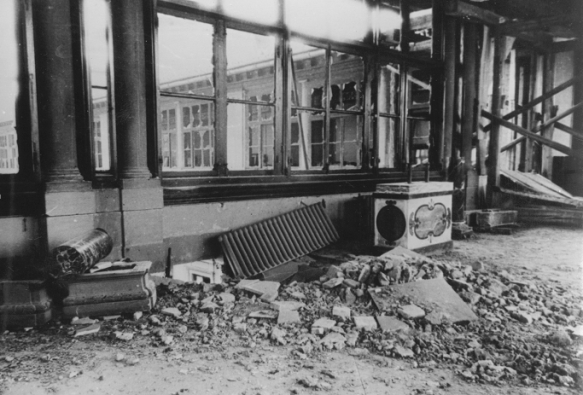 Many photographs from the War Damage Collection in the BSR Archives were taken by other officers such as Frederick Hartt, Perry Blythe Cott, Paul Gardner and Albert Sheldon Pennoyer. Through a detailed comparison of the Ward-Perkins Collection with the Albert Sheldon Pennoyer Collection from Princeton University, we were able to discover additional information, such as places or dates of significant circumstances.

In this example, we see a photograph taken in Poppiano, on 11 August 1944, showing military and civilian personnel loading a truck with crates containing artworks. The date and the description were taken from an identical photograph in the Pennoyer Collection in Princeton.

Fondi, people dining under the doorway of Chiesa di Santa Maria. On the left, a photo by J. B.
Ward-Perkins from the War Damage Collection; on the right, a photo from the A. Sheldon
Pennoyer Collection.

Furthermore, some photographs from both collections confirm that Ward-Perkins and Pennoyer were often together during their surveys, as we can see in the shots taken in Fondi on the same day. We also managed to identify other photographs that were probably taken by Pennoyer amongst those that were still of uncertain authorship in the Ward-Perkins War Damage Collection, thirty-eight in total.

The Prado event prompted us to rethink and reconsider this incredible archival resource by opening up new pathways of research and seeking collaboration with other institutions which hold similar records.

New means of interpretation for research-based practice and practice-based research can be envisaged as will be demonstrated in the forthcoming November event organized at the BSR in collaboration with Joanne Anderson (Warburg), Mick Finch (Central Saint Martins, UAL) and Johannes von Mueller (Bilderfahrzeuge) .