Rodney Cross is the 2018-19 Macquarie Gale Rome Scholar at the BSR. His research project Cantus et Clangor looks at the representation of bird sounds in Latin literature from 100 BC to AD 200. Here he tells us about some distinctively Roman sounds and how this has fed back into his work.

Early on in my fellowship, I was quite struck by the ways that some of the Fine Arts fellows talked about the light in Rome: ‘it’s noticeably ‘other’, especially coming from London’ – ‘it’s really poignant … it enhances the clarity of the rich, dark shadows’ – ‘when the sun is rising or setting, the light refracts and phosphoresces in the air, bouncing off the walls and hitting the walls opposite, combining colours’.

Everyone who mentioned the ‘Roman light’ used a different linguistic angle in an attempt to get at that slippery core meaning of its rather nameless quality. I have a professional curiosity with the challenges and complexities of conveying perception in text, to which my coffee-stained thesis drafts can attest. Being inspired by the sensory attention-span of my artistic colleagues, I redirected my attention to the sounds of Rome. I have since (and often) strained my ears to detect the distinct timbres of the local soundscapes. When you are new to an area, unfamiliar noises tend to play upon your senses. The number three tram that rumbles, tinkles, rattles and shrieks through the streets of Parioli has quite a conspicuous sound. The first time hearing it, I was reminded of Synaulia’s creative re-imagining of ancient Roman music. At other times (and more often than I’d care to admit), this same tinkling-tram would trick my well-conditioned lizard-brain into hearing the ‘ding’ of the BSR’s evening dinner bell. 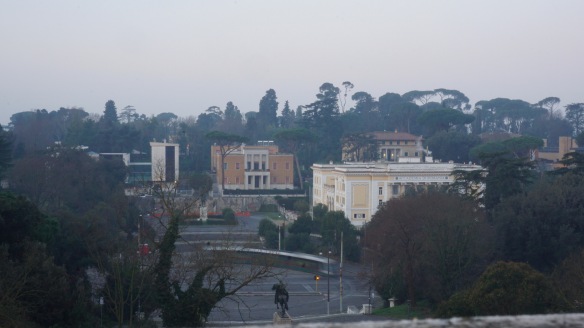 Attentive listening does have its upsides though, as you can often hear birds before you can see them (if at all). This is especially the case for the local Tawny Owl (affectionately dubbed, ‘Pari-owl-i’) who remains quite allusive, apart from the characteristic lilting hoots and trills that carry on well into the early morning. In my first week at the BSR I received some invaluable advice from Stephen [Milner, BSR Director] and Valerie [Scott, BSR Librarian] to keep an ear out for the odd drumming of woodpeckers. After two weeks the advice had slowly begun to fade from my memory, when a hollow clicking seemed to emanate from my new headphones. I removed them, to further puzzlement as the clicking persisted. A few investigatory scans of the Director’s garden revealed a Greater Spotted Woodpecker drumming out a meal on the gnarled and naked tree across the way.

I have always been interested in field-recording, and had often considered producing my own recordings for my comparative analysis of animal sounds in Latin texts. But limited access to portable recording equipment, and the relevant subject matter (i.e. birds of Italy) made this a rather challenging prospect. Dan Popa, a filmmaker and the Québec Resident at the BSR from January to March, was kind enough to lend me some of his recording equipment. More importantly, Dan took the time to provide invaluable practical advice on capturing the sounds of the city.

Sunday morning proved the most profitable time to record the ‘dawn chorus’; a cacophonous array of avian voices singing out at the rising sun. After a few cold (yet caffeinated) mornings, I had a nice collection of these melodious refrains. I started experimenting by applying spectrograms to these recordings to assist in visualising the distinct bird calls. Spectrograms (like the one displayed below) identify the frequency and volume of sounds over time, which can help to visualise patterns in bird calls and songs. I am still getting my ears around identifying the European birdlife by sound, but I was quite taken by the melodic phrasing of a local resident Blackbird.

Sounds of the past and present

I have become very interested in the ways that we, as a modern audience, engage with the remains of ancient monuments on a sensory level. Dan and I set out to record excerpts of Alvin Curran’s sound-installation Omnia flumina Romam Ducunt (‘All Rivers Lead to Rome’), which was presented within the ruins of the Baths of Caracalla. Before we had set up the field-recorder, a momentary buzzing and the ululation of a ‘Roman lupa’ passed our ears in a flurry and quickly faded to silence. So we instead trained our ears upon the immediate soundsphere of the archaeological site itself; the ambient sounds of the space were punctuated sharply by the laughing of gulls, softly by the intermingling of multi-lingual VR audio guides, and harshly by the crunching of gravel underfoot. 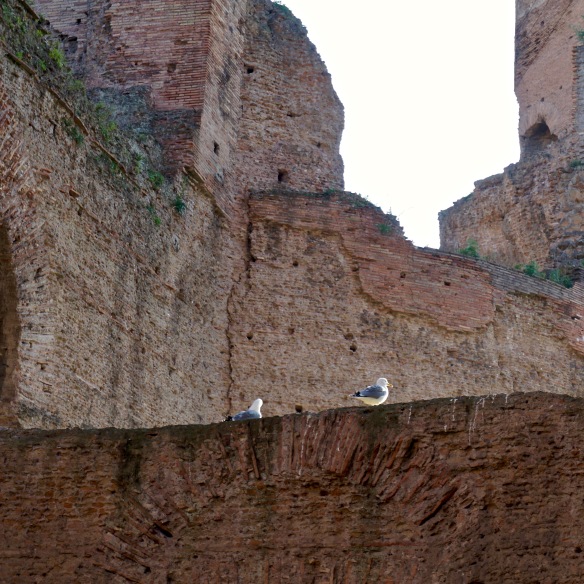 At times archaeological sites can be remarkably still, eerily still, and sometimes the silent atmosphere can fool us into projecting this stillness back onto the past. Considering the role and function of the baths for instance, the cavernous space would have been filled with the echoing of voices, and the raucous gurgling and splashing of streams of water. A noisy past succeeded by a certain stillness and the sounds of ringtones, audio-guides, and tourism.

Ultimately the supportive and encouraging environment that can be found at the BSR has prompted me to reflect critically and creatively on my own academic work. It won’t come as a surprise to hear that my research focuses on the textual representation of animal sounds in ancient Latin texts. In discussing my topic with the BSR’s wide network of scholars and artists I have received stimulating feedback that has energised and encouraged me to both expand and strengthen my research in countless ways. And now with only two months left of my fellowship, there’s still so much more to hear!

Thanks to the generosity of Mrs Janet Gale and the late Dr Bill Gale, the Ancient History Department of Macquarie University offers a scholar from Australia the opportunity to travel to and reside at the British School at Rome for up to six months.