As part of our March Mostra Meet the Artists series, we spoke to Dan Popa
(Québec Resident) about taking a break from film and going back to analogue photography.

You’re a filmmaker but during this residency you are focusing mostly on photography. Is this a prelude to a new film to develop in the future?

The decision came naturally. I brought my photography camera because first of all the equipment is lighter, but I can still use motion picture film. Just from a practical standpoint it’s also a way for me to sketch during my residency. I knew I wasn’t going to make necessarily a body of work, but I knew I wanted to keep sketching.

As I went along and developed the contact sheets, which basically map out your entire roll of film on a piece of paper, sticking them together I really start seeing a narrative or a potential film that could happen from these stills. I’ve worked before where I’ve used still photography in filming so with adding sound and keeping timing in you’re able to make a film just made out of stills. The more I look at it the more I think the outcome will be perhaps a film just because I’ve amassed a lot of things, a lot of really interesting moments, and a lot of moments where I was able to go back and forth to the same locations and re-photograph what I was missing.

Just before coming here I had recently finished a film that had taken me four years to finish, with the last year editing on a computer. I really felt like I wanted to like keep film maybe a little bit off for like two seconds and just start looking again.

What are you showing at the mostra?

What I’m showing at the mostra is something I don’t usually do, but I’d like to use some of this photography perhaps for a film but also as a standalone book because a book does offer a linear narrative, you just take away the sound and take away the amount of time that each image is displayed for – because that’s what film is, it’s saying there’s an in and out point, seven seconds to watch this, two seconds to watch this… so for the mostra I’ve been printing out a couple of pictures and putting them side by side and seeing how they have a correlation and how they could exist both in a film format, but also in a printed book format.

So it almost starts off as an experimental film, there might be some text, there might not be some text, but for now I just wanted to keep it with the visuals, so it starts off with two nuns by the beach, sort of photographing it and then life in the sun… I’ve really been looking a lot at light in Rome, especially the winter light which I’ve been really interested in… this lovely family visiting Pompeii in a virtual reality world, and from there I’m kind of questioning what is their dream… 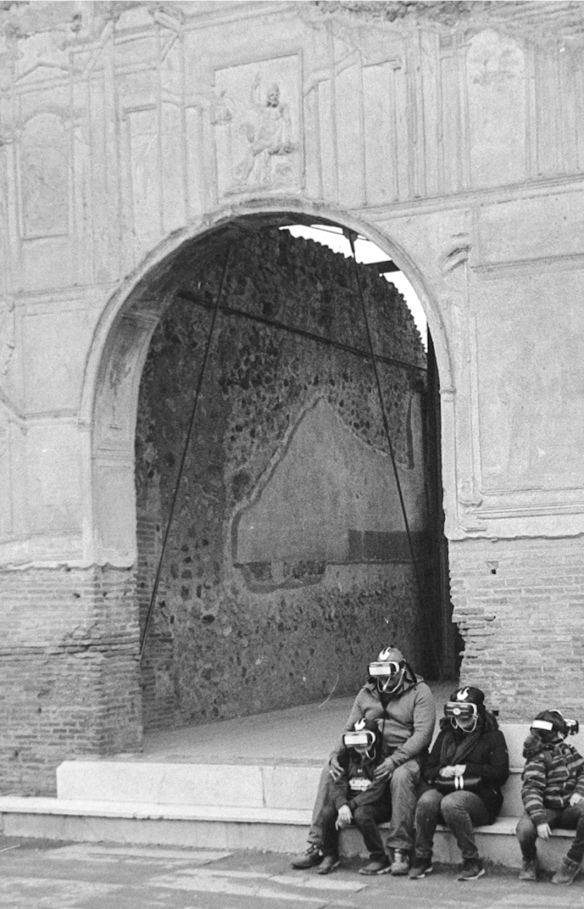 I’m going to display them laid out on the table…they’re very fragile so I don’t want people to touch them too much because they are maquettes in a sense. Also laying them out like this gives the notion that the work is still on the table, a work in progress, it’s not ready yet for putting up.

Some of them I’ve got printed by master printers here in the neighbourhood, printed directly from 35 mm negatives. They are a second generation printers so they really have a different skill.

I did come with the idea of doing something more about the architecture aspects but then I always try to think what does the place dictate for me as well. People are very present, even people who are motionless, so yes I am interested a lot in faces but also in textures, the way light falls on Rome, so it’s really day in day out as I started getting these images and then when you start putting them together for me that it starts having a bit of a narrative.

This for example is the warehouse where they keep all the props for Cinecittà, but then I photographed the ones in Pompeii and they looked faker than the fake ones. So there’s always this play a little bit around the real and the staged and how the real can look less real than the fake. 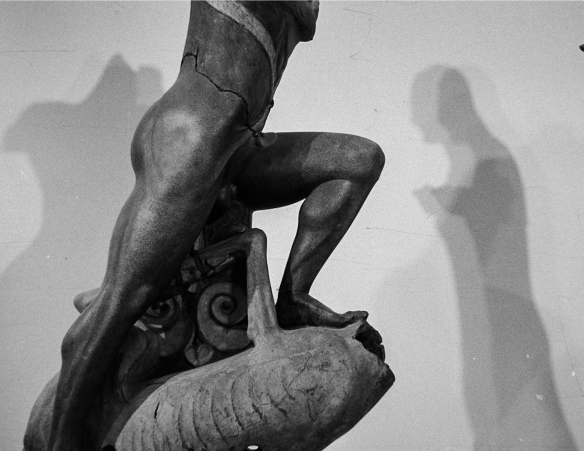 When I arrived here I started filming the last day of Christmas, so the procession and the parade near the Vatican. I’ll be showing a short film I’ve made from that and right now I’m doing the sound mix and the final touches for it, so I think that’s what I’ll be showing at the mostra.

You came across the book Rome + Klein in the BSR Library, a photobook by William Klein. Are your photobooks a response to that?

Klein came here exactly 60 years ago to work on a Fellini film which was very much delayed so he actually spent three months photographing Rome. He photographed sets, and he also had a couple of fashion gigs that he included as well, so it’s a bit of a journal, a bit of an itinerary. He talks about this intensity of photographing in such a short amount of time and I’ve kind of used him as my spiritual guide, knowing that I too only have three months. So I’m not trying to replicate, I don’t assume to be at the level of William Klein’s work. I’m just trying to see how something could be revisited 60 years later.

Is any of Rome going to come into your Le Corbusier film?

Rome comes into it very little. I went back to some of the places that Le Corbusier visited. Oddly enough his first day in Rome ever was in 1911 and he spent time at the Villa Giulia sketching pictures, and that was as they were building the British School at Rome which is right across from there, so it was cool to find that connection.

And what about the photographs you have been taking of BSR life?

So in parallel I’ve been photographing BSR residents and then some of the visits like when we went to Pompeii, and when we went to the Lateran, and then Alessandra Giovenco, the archivist, allowed me to see some of the BSR archives, and it really is important to keep stuff documented, print a few things, and leave some stuff in the archives, because if I’m able to pick up a photo from say 1911 today, it’s because someone went to the effort of doing that. So at some point I would like to print some of these pictures and put them in a box for the BSR because I think you don’t realise the importance of an archive until it’s too late. And that’s the part of photography that’s really fantastic too, is seeing how it ages with time.