Ahead of the December Mostra as part of our Meet the Artists series, we spoke to Soheila Sokhanvari (Derek Hill Foundation Scholar) about the use of pattern and colour in Greco-Roman art, as well as her recent public arts commission for the Mayor of London’s #BehindEveryGreatCity campaign.

As a cultural hybrid, born in Iran but having lived in Britain for most of your life, you are captivated by ideologies that connect Eastern and Western cultures, particularly through complex elaborate patterning in Islamic art and its connection to Greco-Roman and Byzantine art. How are you developing this during your residency in Rome?

I have always been drawn to pattern because my father was a fashion designer and through him I learnt about how we use colour and patterns to create visual identities and even for storytelling. Decoration, patterning and taste explore subliminal communication tools that are never neutral and contain the cultural, the socio-political, colonial history and economics of a society, for instance the clan specificity of the Scottish tartan or the Kente patterns of the African cultures (which were actually designs by the Dutch and adopted in Congo) have symbolic meaning that are culturally explicit. Patterns can be specific to an economic stratum as in advertising companies’ use of branding such as Burberry, Liberty, Gucci etc, they can also be specific to an era like the flower power of the 1970s and they can create a subconscious communication that historically we have used in considering each other. 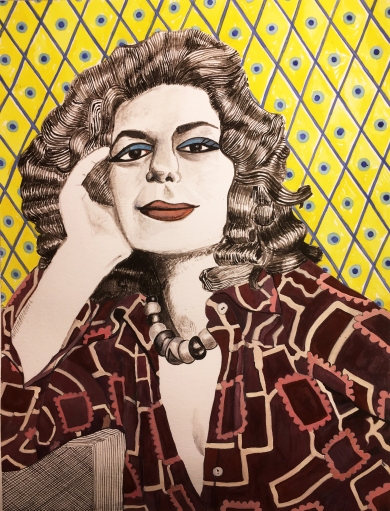 The Islamic geometric pattern was born out of the Greco-Roman patterns as a substitute for the figure in art. In Islam geometric patterning symbolises the infinity of God and the vastness of the universe and by decorating every single space it is meant to create delirium in the viewer in order to contemplate God. In Roman culture the geometric mosaic borders at the entrance of buildings were thought of as defensive devices in presenting a puzzle, that caused a ‘cognitive stickiness’ in demons who were trapped in an endless sequence of attempting to unravel the design and that any evil spirit would have become so fascinated by its entwined strands as to suffer from a paralysis of will so as not enter the buildings (Gell, A). The eternal city of Rome is a treasure trove of colour and patterns and it is fascinating how modern some of these Roman patterns are, of course that is because they have been an inspiration for designers and artists for centuries. I have been looking at the simple geometric patterns for instance the diamond shape opus reticulatum which was used by the Romans in their brickworks, the ◊-shape in the mosaic works – so simple and yet so mesmerizing – had a symbolic meaning too, the two triangles, one downward (Yin) and one upward pointing (Yang), embodies the balance of the universe and the networks of life. It is riveting to learn how for the Romans every colour and shape had a meaning that we have lost the ability to connect with or read.

I have also been binge watching Italian films and happily stumbled onto drawings by Fellini who was a witty draftsman. I adore his films and now am an even bigger fan of his. I have been working on portraits of Iranian pre-revolutionary female pop-stars photographed by men with a view to reinterpret them under my gaze. 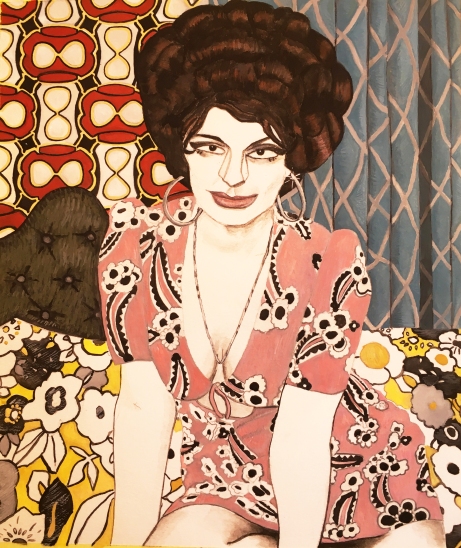 You took part in a public arts commission in collaboration with Tate Collective and the Mayor of London, #BehindEveryGreatCity, to mark the centenary of the first women in the UK winning the right to vote. Can you tell us more about this project?

This project was curated by Tate collective as part of the Mayor of London’s endeavour to create a series of public art works each inspired by a specific woman who had been overlooked from London’s history. There were twenty artworks in total and I was given the site of Victoria Station. There were several conditions to meet for the proposal – it had to address the history of the suffrage movement and reference the legacy of the chosen artist for that specific station. Victoria Station was the location to celebrate Marion Dorn because she was an important female artist living and working in Chelsea, London, from 1923 to 1940. She was an American artist who designed the original pattern for TFL (Transport for London) which continues to inspire designs used today, and her textiles and carpets were hung in iconic interiors such as the Savoy, Claridge’s and the White House.  Marion Dorn was nicknamed the ‘architect of the interiors’ because of her designs for floors and carpets. She was a huge success opening her own company in Chelsea, London.

My piece was realised as a carpet inspired by an earlier carpet made in 1935 by Dorn and the colours that she used were symbolic of the American suffrage flag colours – green for hope, yellow for life and purple for loyalty. You can see my work which is presently hanging in the young people’s workshop at Tate Britain.

Soheila’s work will be exhibited alongside the six other resident artists in December Mostra, opening Friday 14 December 18.30-21.00.