Last week a joint team from the BSR, the Ashmolean Museum and King’s College London completed the excavation of a small Roman villa at the village of Matrice, 10km from Campobasso in the Southern Italian region of the Molise.

Work began at the site in 1980 following its discovery during the construction of a road. At the time, Graeme Barker (later Director of the BSR 1984-1988) was leading the Biferno Valley survey, and together with John Lloyd was invited by the regional authority to investigate the site. Over the following four years John led a team of archaeologists from the Universities of Aberdeen and Sheffield in the excavation of the villa. The excavations brought to light a fascinating site, with occupation from the Samnites through until the late antique period, and it was clear that the villa could provide much information about the impact of Romanization on rural communities. Sadly John passed away in 1999 whilst the publication was in preparation, but given the importance of the site we felt obliged to bring this site to publication in his memory.

The new fieldwork began in October 2017 with a topographical survey and geophysical prospection of the site, generously funded by the Roman Society. The results, written up as a Master’s thesis by Elena Pomar as part of an internship at the BSR (Elena has joined the BSR this week as Archaeological Research Assistant) showed that the villa extended further to the west than previously understood and that within the excavated villa several areas could help better understand the earlier phases of the site.

Archaeology Officer Stephen Kay is interviewed by RAI television. Watch the interview with Steve, as well as Paul Roberts of the Ashmolean, and Dominic Rathbone of KCL here at c. 13 minutes

In September this year a three-week season was undertaken with the aim of investigating the anomalies recorded by the geophysics and refining the chronology within different parts of the site. The excavation revealed that the magnetometry had recorded the precise position of a large cistern, still with a well-preserved cocciopesto lining belonging to the Roman phase of the site that fell out of use in the 3rd century AD. Whilst the earlier work had recorded a network of drains and rooms indicating agricultural practice, it had been unclear where the water source was to allow these processes.

A paw print on a tile from a rubble layer inside the newly discovered cistern. Ph: Stephen Kay.

Elsewhere on site a small trench was excavated at the southern extent of the villa within a previously unexcavated room, the aim of which was to record evidence of the earlier phases of the site. Through the careful excavation of a later drain, evidence was recorded at a greater depth of the Republican phase of the complex. An intriguing aspect of the site, both for John and for us, is the Samnite phase which saw construction undertaken using large roughly trimmed limestone blocks. The aim of the new fieldwork was to reveal more of the structure and understand if it was associated with the dwelling or perhaps had another purpose. Excavating within the structure, a further wall built from limestone blocks was recorded, which can be securely dated to the 2nd century AD. 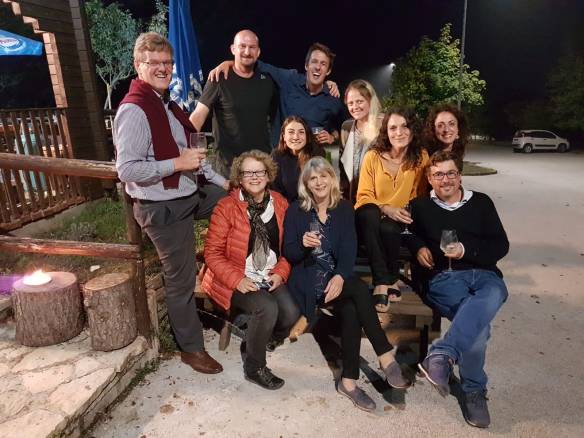