As we approach the June Mostra, our second exhibition of this academic year, we will be publishing a series of blogs taking a closer look at the individual practices of our seven resident artists. Our penultimate interview is with Josephine Baker, our Sainsbury Scholar. 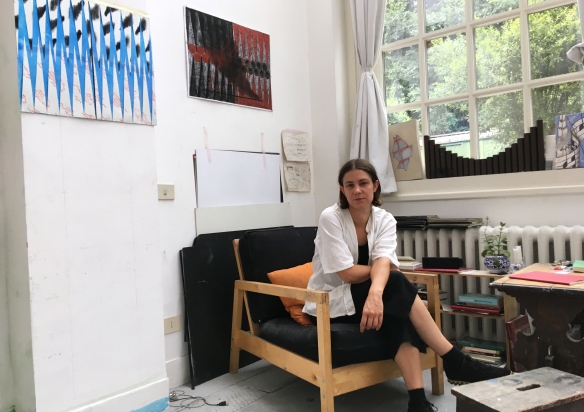 You often address political currents or notions of ethical value in your work, in particular the symbols surrounding them. What ideas have you been exploring in this installation?

Last month I was working in the gallery downstairs on an installation called Night Music, elements of which I am showing in the June Mostra. The first central image you encounter – or rather can’t avoid – on the back wall, almost looming over the landscape of the installation, is a work made from chalk on bricks: a circle of stars, replicating those of the EU flag. 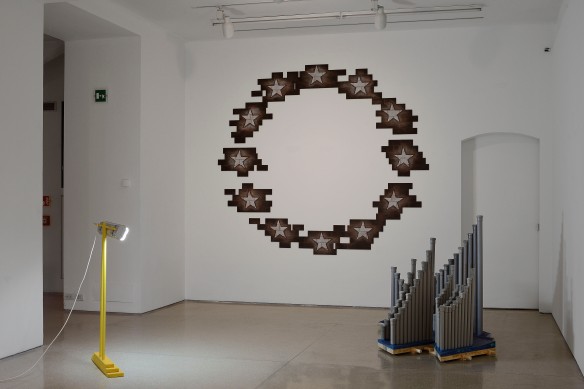 This work, and how it is placed amongst the other works in the gallery, is for me about contextualizing a universally-recognised symbol; forcing it out of its abstract value, into being in some way more dynamic, fluid, physical. By altering its form, colour, materiality and scale, I hope to put into question not just the associations attached to the flag, but also to question the structure of the image itself. For example, by rendering this symbol in black and white, the stars are in some way reintroduced to the naturalism that they represent, as an image of a constellation in the night sky. Its symmetry and ‘perfection’ then becomes – in this particular context as well as the context of my work more generally – about addressing an idealization and politicization of nature, or natural form. I ask myself: To what extent is that tendency a far cry from the symbolism surrounding the political idea of the unity of peoples? The symbol strikes up a bodily sensation in the room; the physicality of the image for me is in some way connected to the physicality of nation states and the geopolitics of Europe.

I think there are so many ways to interpret this work, but when as an artist you use an image this laden with identification, you inevitably come up against many concerns: perhaps the worry that others will assume that you are attempting an acute political commentary, or expressing your own personal political views, about Brexit for example. You ask yourself whether it will be read as propaganda, or how easy it really is to manipulate these images free from any political agenda. I guess this work will inevitably pose these questions to a viewer too, which could potentially be a really positive thing. 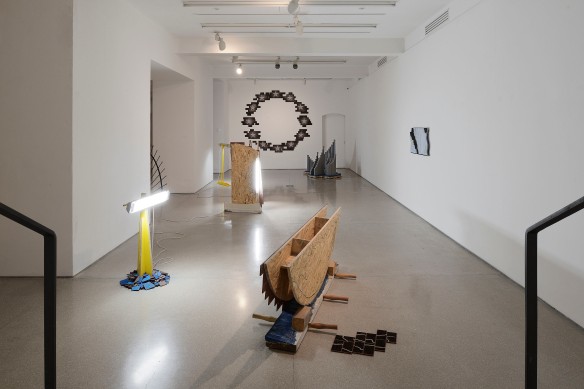 How does this work relate to or affect the other parts of the installation?

I want this work to be a focal point for the installation – to see to what extent we can confront symbolic language, to understand how much of a stake it has in its environment, how persuasive, how overbearing. Essentially, to ask to what extent it irreconcilably changes the way that you view everything else inside the space. How does this particular work give agency to or withhold power from the much quieter pieces? In this sense to me it is an obvious metaphor for the politics of power, and the unequal and haphazard relations between the different objects and images in the space. Yet the circle of stars of the EU flag stands as a symbol of unity, a perfect constellation of elements brought together. So perhaps the question also is: How do the works in this room create a similar constellation, addressing in themselves and their relations both the political idea and the emotional experience of unity?

The potential affective quality of installation for me is to place or position the viewer where space is not a fact, or an answer, but always a kind of question: Where am I? Where you find yourself is inextricably linked to notions of identity. The question ‘Who am I?’ would not exist without the place. I attempt to create environments that challenge the ‘where’ and therefore the ‘I’. 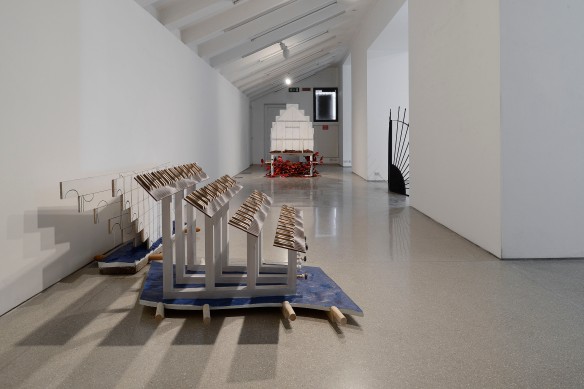 Your sculptures are literally silent, yet the things you represent – from pipe organs to natural disasters, or debates about the EU… – are inherently loud, both physically and metaphorically. How does the work address this seeming contradiction?

This is why the installation is called Night Music, to play with this contradiction through an ambiguity: Is ‘night music’ a nocturne, the sound of the night, an impression of it, or simply the idea of quietness, even silence? You can consider the night to be the exact opposite of the cacophony of day – the night when, as a human being, nearly everything is sleeping. I am interested in sounds being interruptions in the silence of nighttime, like perhaps how the sculptures intervene or punctuate the low-lit gallery space.

This body of work started as the idea of making an installation that plays with the same forms, tempos and relationships as make up a musical composition. Every instrument is a sculpture – they all do different things. There are some constants, refrains, some pick out and build the melody. Every piece has a part to play. Together they work to create a unified sound – be it harmonious or disjointed, eliciting calm or disquiet, but somehow unified. I’m interested in how the space or landscape of an installation can repeat, ripple, swell, in a similar way. 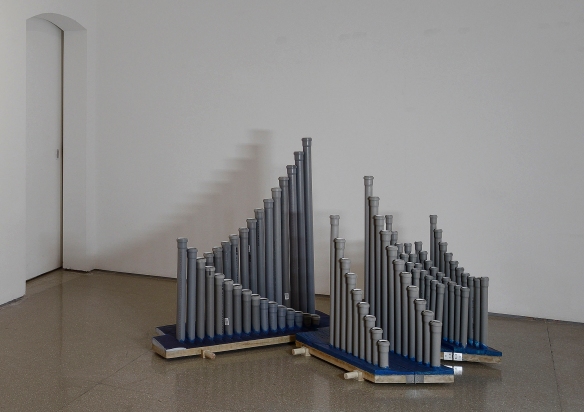 In the work there is also a nod to the distribution of sound in, say, the space of a baroque church. Upon entering a church in Rome you almost immediately encounter the edifice of the pipe organ, but you rarely hear it being played. Often the loudest thing inside the church is ironically the voice telling you to keep quiet. But considering the pipe organ, there is this contradiction between its grandeur, its presence in the space (you only see the front pipes – there are often hundreds if not thousands of pipes hidden from view, in different corners and crannies) and its latent chaos or harmony, the sound it can produce.

I want the environments I make to propel the viewer into a sensual experience of the things that exist within it. A musical instrument is such an example of a sensual combination of the spiritual and the utilitarian, which is often the tension I want to explore in the sculptures. They are tactile, they reference function and are made of utilitarian and standardised materials. The pipe organ is made out of plumbing piping. Most have handles that suggest the objects’ use in some kind of ceremonial practice that is never enacted. It’s about the attempt to understand the noise of the work’s political currents through this metaphor, where what is seemingly absent or invisible is nonetheless completely there, overwhelming the silence. 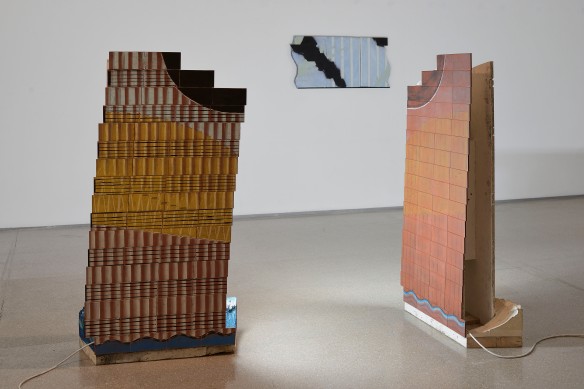