Professor David McKitterick introduces a selection of the latest addition to the BSR Library’s Special Collections.

Quite apart from its modern collections, the BSR owns a remarkable collection of early printed books, many of them from the library of Thomas Ashby, to which other benefactors have given since. But the BSR has not been able to add to these for a long time. When in February the collection of books about Rome assembled by Sergio Rossetti came onto the market in Milan, there was an unprecedented opportunity to enrich the library.

Rossetti’s four-volume bibliography of Rome was published in 2000-4, and he built up his own remarkable collection alongside. Thanks to the imagination and prompt generosity of Mark Getty, the BSR was able to acquire over a hundred volumes at the auction, dating from the early sixteenth century to the late nineteenth.

Some were magnificent illustrated books, such as Pietro Castelli’s volume of engravings of rare plants in the Farnese gardens (1625), or Pietro Ferrerio and Giovani Battista Falda’s engravings of palazzi (c.1660) many of which have now disappeared, while the great etchings in the folio Rovine del castello dell’Acqua Giulia (1761) show Piranesi’s interests as simultaneously antiquary, architect and hydraulic engineer. 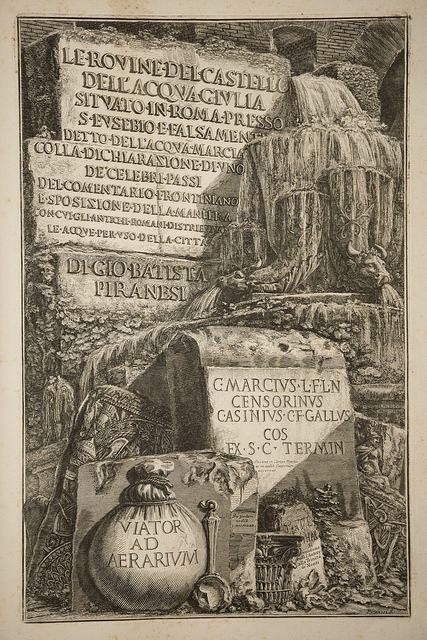 The copy of Giacomo Lauro’s collection of views Antiquae urbis splendor (1637) is in an impressive gilt binding with the arms of Pope Urban VIII. A group of sixteenth-and seventeenth-century books about the Tiber focusses , not surprisingly, on the periodic floods. An illustrated volume by Nicolai Alemanni on the Lateran palace (1637) focusses on Pope Leo III’s grand new ninth-century dining room, or triclinium, decorated with mosaics and only some of which survives.

At the core of this wonderful accession is a large group of guidebooks, in Latin, Italian, French and English, to be added to the already notable collection of these already on the shelves in the BSR. While such books are obviously reflections of local identity and are invaluable for anyone trying to unravel the history of ownership of works of art, they are also some of the closest ways we can come to seeing the world through the eyes of earlier centuries.

Just to read the ever more detailed guides, meeting the needs of seventeenth-century tourists such as John Evelyn or John Milton, or a host of eighteenth-century visitors, is not only to begin to see with their eyes, but also to wonder at the energies of people who (if they followed some guidebooks’ instructions) were expected to see Rome sometimes in as little as three days: the Vatican and Trastevere could easily be dealt with in just one. But these guidebooks tell us more.

Pompilio Totti, the much-printed author of the best of the seventeenth-century guides, showed how Rome could be divided into antica and moderna.  By the time we come to read his even more popular successor, the archaeologist Antonio Nibby (first published shortly after the Napoleonic wars and widely available in Italian and French) there are new concerns, arising from the ever-more revealing excavations. How should ruins be preserved, and how should they be shown off? These remain no less topical questions today. 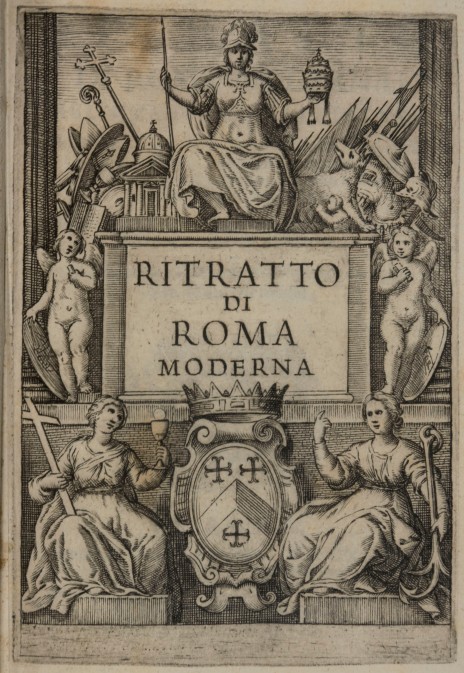 Of the later books, one further might be selected among these prizes. Matthew Dubourg’s  Views of the remains of ancient buildings in Rome and its vicinity  (London, 1820) has become rare because so many copies have been broken up for the sake of the lovely hand-coloured illustrations. But the text is worth reading as well, influenced by the fashion for gothic novels and written by a person informed by the dramatic paintings of Salvator Rosa. This is the Rome of the romantics, published just a few months before Keats died. Not surprisingly, Byron is quoted on the Colosseum: ‘a noble wreck, in ruinous perfection’. All these books invite further study, and all are being added to the union catalogue URBiS (www.urbis-libnet.org).

From Matthew Dubourg, Views of the remains of ancient buildings in Rome and its vicinity…………, London 1820

Meanwhile, a selection is currently on display at the Entrance Hall of the BSR.

David visited the BSR and gave a fascinating talk to staff, residents and award-holders about the new arrivals. 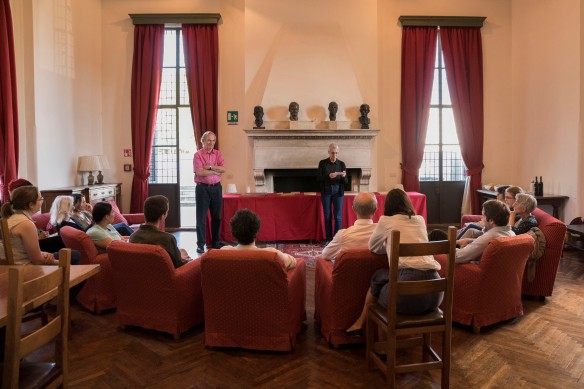 The research potential of our Special Collections has been enhanced by this remarkable gift and our aim now is to seek funding for specific BSR Library awards to generate more opportunities for research projects based on our rich collections.