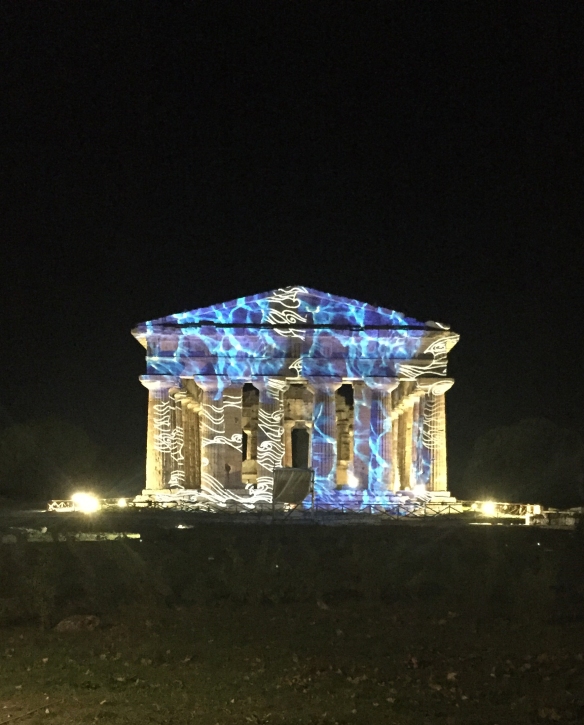 Video mapping onto the façade of the Temple of Neptune (Photo: Stephen Kay)

Against the backdrop of the stunning 5th century BC Tomb of the Diver,  this year the BMTA also honoured the family of Khaled al-Asaad, the Syrian archaeologist and the head of antiquities for the ancient city of Palmyra who was killed in 2015 for his protection of the site.

5th century BC Tomb of the Diver (Photo: Stephen Kay)

Together with 120 exhibitors from 30 different countries, the event also hosts a series of ‘Archeo Incontri’, an opportunity for the public to engage with archaeologists and hear about new research projects underway around the Mediterranean.

For several years the BSR has participated in the event under the umbrella of AIAC (Associazione Internazionale di Archeologia Classica) and the Unione Internazionale degli Istituti di Archeologia, Storia e Storia dell’ Arte in Roma. This year the institutes offered a glimpse into the work of the archaeologist in the digital era. The session, moderated by Kristian Göransson (AIAC President and Director of the Swedish Institute of Classical Studies in Rome), saw the participation this year of four speakers, Eeva-Maria Viitanen (Institutum Romanum Finlandia), Ségolène Maudet (École Française de Rome), Olof Brandt (Pontifico Istituto di Archeologia Cristiana) and our own Archaeology Officer Stephen Kay.

The University of Southampton and the BSR have been leading exponents of the application of digital technologies in archaeology, whether through geophysics, recording techniques or 3D modelling. At the same time as Simon Keay’s keynote lecture at the Being Human festival in Rome (see last week’s blog by BSR Research Fellow Peter Campbell), Stephen was able to show how through a combination of digital technologies in the field, the Portus Project has been able to reconstruct individual buildings and the landscape of Rome’s Imperial port.