The second artist-in-focus for our Meet the artists blogs for June Mostra 2017 is Gary Deirmendjian, National Art School, Sydney, Resident. Here he discusses how he has been interacting with Rome during his residency, and explains the process behind some of the works he will be showing in the June Mostra.

Can you reveal a bit about the work you will be showing at the June Mostra?

I came to Rome loaded with ideas of engaging with the city’s architectural palimpsest, but those have been side-lined and the city itself has been pulling me towards it and I’ve just followed my nose. In the Mostra, I will be using one of the cabinets next to the lecture theatre as a display for things that have washed up at the footsteps of the BSR. I’ll be displaying them as archaeological dig finds. You can imagine someone digging this up in 2000 years’ time – if we ever make it that far – and they’ll be just as excited as archaeologists today upon making a discovery and pouring into its tiniest details.

The other is this notion of lead handkerchiefs, and that’s what’s on this table here. These are impressions taken of the city itself: some of them I’ve wrapped around the physical objects that already existed in public space, like the foot of a sculpture in the Borghese gardens.

Cast away objects picked up by Gary for his Mostra display. Photo by Ellie Johnson.

Impressions made with lead handkerchiefs. Photo by Ellie Johnson.

How do you work with the lead handkerchiefs? Is the material quite malleable?

They’re thin enough to be malleable but hard enough to keep the form – I made my own tools to work with them. This is an impression I made of one of the statues in Villa Borghese. You can see it’s quite baroque when you look at the drapery, acting like a cloth that’s shrouding something. 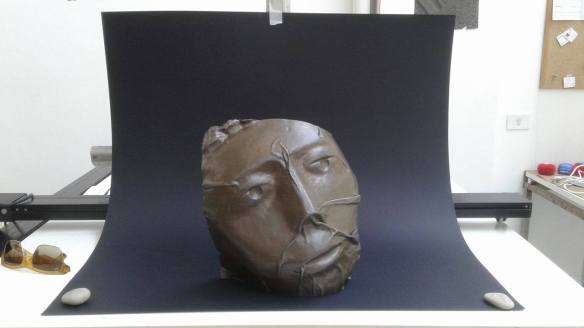 Impression of a statue made by Gary. Photo by Ellie Johnson.

Working with something like this, do you aim to get the folds in a certain way – for this impression, were the creases deliberately placed?

No, it’s purely incidental. No two can be formed the same way, so that each time I do it it is unique to that instance. There’s also a cobblestone which has been ‘wrapped’, but the others are impressions of the city itself, so that thing had to have been there, I had to be there to make it happen, and they are a record of that moment in time.

Cobblestone shrouded by a lead handkerchief. Photo by Ellie Johnson.

Another example is an inlaid bronze skull and bones relief from the floor of the church Santa Maria del Popolo: for this one I went in with a group of tourists and dropped the sheet of lead in place and stomped on it over and over again to get the impression, using tourists as a cover. other versions of these are simply leaving lead sheets on a road or pavement, and collecting them a day or two later. in these instances i’m allowing the city to shape the work. So, some are incidentally formed, whereas others are more me in a concerned way.

How do you decide on a space for an intervention – say with the link you did in the studio or the interventions opposite the GNAM [Galleria Nazionale d’Arte Moderna]?

The site ends up choosing you: with the space opposite the GNAM, I was walking there on a regular basis and noticing the biscuits [bitumen pieces], and you’ve got this bombastic gesture of the gallery directly opposite this very humble space, on equal height, where quite a few homeless people sleep at night. My heart always goes towards the ordinary, and so to do something anonymous and ordinary and hope that that might lead to some sort of a dialogue was the impetus, really.

‘the past has claws’. Photo courtesy of the artist.

Do you feel any protectiveness over your public installations, or is it the case that once it’s there it’s open for people to do what they want with it?

I’ve worked enough in public space to know that the public have a mind of their own and there’s no way of even trying to control that beast – it’s wild and unruly, and exciting as well. I do get incredibly precious as I’m making something, but for me the magic is in the making and it’s where the art lies. Once it’s there, I tend to distance myself through photography, and then before you know it, you are less emotionally connected.

Would you say you have had to build up to that attitude over time?

Yes, definitely. Working in public spaces, you’re on equal ground with everybody and it’s quite raw and unlike a white cube gallery, where everything inside that white cube has been mediated through some authority, whether it’s curators or critics or gallerists. The ‘specialness’ of that is something I find grating, because the truth is if you shut down all the art schools and all the galleries, there would still be art and it would probably be more authentic.

At first, leaning towards the public was harrowing in terms of being overly protective, but you toughen up. The whole point of the stack was to see what might happen, and it ended up producing some surprising results which were quite satisfying. The roman stack almost became a permission for people to play there, both children and adults. The public can either give or take away, but you just have to take the good with the bad I suppose!

Working in Rome in comparison to working in Sydney, are there any parallels that you have noticed or perhaps been surprised by?

I don’t have a studio in Sydney, but a lot of people give me spaces to work in, like the National Art School. The city itself is my studio and I suppose I have simply continued to act in that mode here in Rome. The parallels are just me being me, but the context is obviously different, and it’s made me aware of other things. For example, in Sydney I wouldn’t have been aware of bitumen, but here I’ve become super aware of it. The two places have been quite different, but being open to the differences, they excite and create possibility.

So, in Sydney the city is your studio, but here you have both the city and you have the studio; how do you think that has made a difference to your practice?

Having a studio is a huge luxury for me. It’s been a home first and a studio second – whatever you see here has happened outside and brought inside just for convenience. Other than the link work, I haven’t really worked in the studio. So I guess old habits are hard to break!

I’m making a lot less than I used to. I’ve never been comfortable rendering one material to appear like another, or making something look like something else, so more and more I’ve been appreciating the actuality of things, and sites do in fact contribute important resonance to any work’s suggestive mix. With those objects in the display case, each one of those things has its own story to tell: each one has been made, distributed, retailed, purchased, taken away, used and then tossed. They’re now individuated things by virtue of the sum total of their incidental experiences.

My definition of art is very much a ‘small letter a’ art, and I can’t see it as being anything more than just a suggestive form of communication. Hopefully, it’s akin to poetry, and it’s got some suggestive power that can lead someone to individual thought and feeling.  If my work can do that for some, then my job is done.

Gary’s work will be exhibited alongside the six other resident artists in the June Mostra; open 16.30-19.00, Friday 16 June until Saturday 24 June 2017, closed Sundays.