Zoe Cormack, one of this year’s Rome Fellows, recently visited Naples to see the remnants of the Mostra Triennale delle Terre Italiane d’Oltremare, a fascist-era colonial exhibition, as part of her research into ethnographic collections in Italian museums. Here she reflects on her visit.

The Mostra Triennale delle Terre Italiane d’Oltremare, which opened in Naples on 9 May 1940, was one of Europe’s last colonial exhibitions. Envisioned as ‘the largest and most complete survey of the force of Italian expansion overseas, from Caesar to Mussolini’ it was an extraordinary piece of fascist-colonialist propaganda. However, only a month after opening, Italy entered World War Two and the Mostra d’Oltremare closed. Today, the site in Campi Flegrei is partially accessible and remnants of the exhibition can still be seen.

My interest in the Mostra d’Oltremare arose during my BSR fellowship. I have been researching African ethnographic collections in Italian museums – and many objects from these collections were sent to Naples to be exhibited in the Mostra. The site was bombed in WW2 and all the exhibits were destroyed. In trying to understand the context for the loss of these objects, I’ve become increasing interested in this (largely forgotten) colonial exhibition. At the end of March, I had the opportunity to join a group from the Swedish Academy, led by Marie Kraft, to the site in Naples.

The Mostra d’Oltremare was conceived after the invasion of Ethiopia in 1936. It aimed to celebrate Italian colonial achievements and project the image of an important imperial power.  It was planned at the same time as the better known (although never opened) Esposizione Universale di Roma (EUR) in Rome. Naples was considered a fitting venue because it is an important port, linking Italy with the Mediterranean and Africa. There was also a town planning element – it was hoped the exhibition would contribute toward the development of west Naples and the expansion of the city.

There were three sections of the Mostra. A ‘historical’ section dealt with the history of imperialism from antiquity, to nineteenth century conquests in Africa, to the fascist present. It conveyed the idea of an ancient predestination to Italian colonialism. This was also illustrated in the Mostra’s official poster, which depicted a sandaled foot stepping down on north African soil. The ‘Production’ section included installations carrying messages about the value and potential of the empire. A ‘Geographic’ section contained a pavilion for each of Italy’s overseas territories (the focus was on North and East Africa, but Albania was also represented).

Artefacts were brought from museums across Italy. There were also living exhibits – a feature of European colonial exhibitions more widely. Materials and workers were transported from East Africa to construct authentic buildings for villaggi indigeni. Several families were brought from Somalia, Eritrea and Ethiopia to perform. Horrifyingly, when the Mostra closed they were unable to return to East Africa and were forced to live near the site in terrible conditions, enduring bombing, until they were moved to a former concentration camp for women at Treia in 1943 (more details of this terrible story can be found in Brian Mclaren’s work)

Architecturally, the Mostra d’Oltremare aimed to fuse metropolitan and colonial environments. It was designed to give the visitor an experiential sense of being ‘overseas’. Plant and trees were imported to create a genuine sense of the exotic. One of the planners claimed in 1940 that it might be ‘the only public park to be built in Naples after the departure of the Bourbons’.

Visiting the Mostre d’Oltremare today is a strange experience. Apart from a brief reopening in 1952, it was completely disused until 1998. The site has now been partially rehabilitated as a conference centre, and there is ongoing renovation of some buildings. However, much of the site is overgrown and in ruins.

At the original entrance, you can see what is today called the ‘Tower of Nations’ (formerly the ‘Tower of the Fascist Party’). It is currently being restored to function as an event centre. 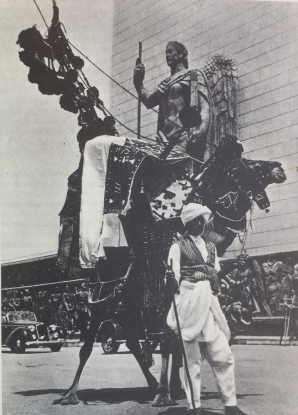 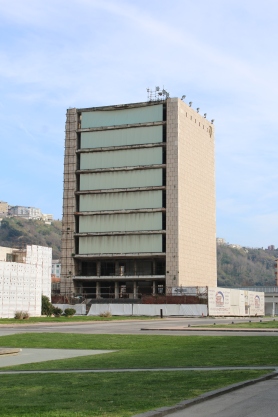 Rehabilitation as ‘Tower of Nations’ in process, 2017. Photograph by Zoe Cormack

We were given access to enter another large building – the Cubo d’Oro (gold cube) – which is all that remains of the pavilion of Africa Orientale Italiana (Italian East Africa). 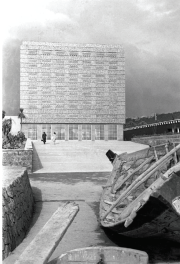 Inside the Cubo d’Oro there was originally a large globe (representing the reach of the Italian empire) and the walls featured inscriptions from Mussolini’s May 1936 Proclamazione dell’Impero and two frescos by Giovanni Brancaccio, depicting Mussolini’s ‘Triumph’. These extraordinary frescos have survived. The Roman past was widely used to glorify the fascist party, but it is still striking to see Mussolini so explicitly transplanted into the Roman Triumph (and in the context of colonial propaganda). There is another Rome connection here, as Brancaccio’s frescos were the inspiration for one of William Kentridge’s depictions of Mussolini in his recent ‘Triumphs and Laments’ mural on the banks of the Tiber.

Brancaccio fresco in the Cubo d’Oro in 2017. Photograph by Zoe Cormack.

In 1940, the Mostra contained over 200 other artworks. Most of these were destroyed in WW2. Another large piece has survived on the wall of the swimming pool/restaurant complex. It is called Ritmi Africani (African Rhythms) designed by Enrico Prampolini and realised by the futurist ceramicist, Tullio d’Albisola.

Adjacent to the Cubo d’Oro is a small lake with a replica of part of the castle of Fasilides (Emperor of Ethiopia from 1631-1667) in Gondar. Across the lake is the coptic church (now ruined) and the area which housed the villaggi indigeni.

Castle of Fasilides in 2017. Photograph by Zoe Cormack

Many of the buildings, such as the extensive ‘Libyan Pavilion’, designed by Florestano di Flauso, are completely inaccessible and decayed

View of the ruined Libya Pavilion in 2017. Photograph by Zoe Cormack

Door to the ruined Libya Pavilion in 2017. Photograph by Zoe Cormack

There is so much more to say about the Mostra d’Oltremare, its place in the history of Italian imperialism and what it reveals about the intersections of colonialism, fascism and World War Two. I was initially drawn to the Mostra on the trail of objects lent from ethnographic collections to illustrate Italian contacts in Africa. But there is also a hidden history of violence perpetrated against the East African families who were first displayed, and then effectively interned at the exhibition as WW2 engulfed Naples. Naples was chosen as the site of the Mostra d’Oltremare because of the imperial connections its Mediterranean port represented. Today, in the context of the migrant crisis, the Mediterranean is the site of new and perilous forms of crossing. The Mostra d’Oltremare is an important reminder of the violent and extractive history underpinning contemporary relationships across the Mediterranean – it is worth our attention now more than ever.

I have drawn on the research of Giovanni Arena, Giacomo Dore (in ‘L’Africa in Vetrina’), Brian Mclaren and information leaflets produced by Mostre d’Oltremare to write this blog. More photographs and information about the exhibition can be found in their publications.