Over the next few days we will be introducing you in turn to the six resident artists who will be exhibiting in the March Mostra on Friday 18 March. With under one week to go, we spoke to Ross Taylor in his studio to find out more about him and his work. 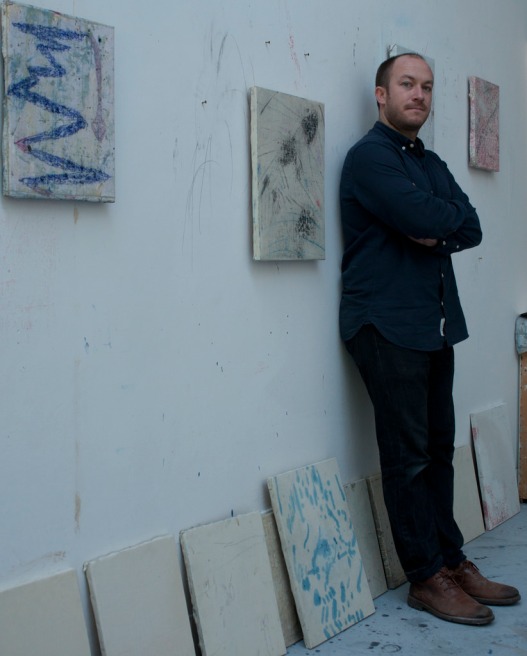 Ross Taylor’s paintings are concerned with a language that is non-specific.  A kind of poetics where only condensations appear on the surface, attempting to model thoughts and ideas that seem to be impossible in a physical realm.  His research in Rome will focus on late medieval conceptions of virtual space and the techniques employed in portraying the sacred and the figureless.

You’ve been here for three months already and so we have seen some of your work in the December Mostra: Open Studios 2015. Has there been anything from the October-December period that has carried over into your work during these three months, or have you found yourself working with completely new ideas?

Well, I think I had arrived from London with a lot of ideas. I was a bit bowled over by Rome and I thought I was responding to it in my work, but maybe I wasn’t as much as I thought! But this term I have been able to let the work catch up with me and I think I am feeding more of Rome into the paintings. I have noticed that everything has become a lot more broken down, which for me, as opposed to the more figurative stuff I was doing before Christmas, is an indication that I am perhaps more aware of how I am experiencing places here, rather than just making paintings as a way to acknowledge what I’ve seen.

So Rome is reflected more in your recent work?

For me, I believe I am never really going to be able to comprehend being in Rome, so I am glad that my work has got a bit lost and become more like a morphing series of marks. If I suddenly started painting specific things that I’d come into contact with, I think that it would be a sign that I didn’t know what to do with everything that was going on. I suppose a lot of it comes down to what we said before at the last mostra, about ‘skin’ and the ‘skins of Rome’. I am just constantly bowled over by how there are so many different surfaces in this city. It sounds a bit cliché but I like how things aren’t obsessively renovated and maintained the way they are in London. There are plants growing out of walls and you know someone must have made a decision for it to be like that, the culture here is just different and things are allowed to be. Also, being able to go see things like the Domus Aurea has really inspired me. It’s such a great story hearing about Renaissance artists rediscovering the Palace and being lowered down through holes in the ceiling to copy the frescoes inside. Thinking about the connections between work made in the 1st century AD and the work made 1500 years later, there is such a huge amount of time in between but there is such a visible connection there. It makes me feel that I am allowed to think about what art will be made in 1400 years.

You’ve talked about the inspiration of Rome as a whole, and specifically about a trip to the Domus Aurea. Has there been anything else that you think has inspired your work?

I do feel that there is a lot here for me, things that I didn’t realise, or didn’t even know were here. Learning more about fresco painting for instance, how historically it wasn’t always the most valuable art form, it served as a cheaper alternative to mosaic. In the Palazzo Massimo there are some really odd pictures that are almost like graffiti; there’ll be a floating head next to a bunch of grapes, next to a table, next to a mask, a kind of composition that teeters on decoration. I like that, painting that becomes a lot more informal, you don’t need to prescribe it to landscape or portrait, it becomes more like a diagram.

It’s not just the city, it’s the people too. It’s been really great being next to artists like Anne [Anne Ryan, Abbey Fellow in Painting] and Damien [Damien Duffy, Arts Council of Northern Ireland Fellow]. The other resident artists come in with fresh opinions and that’s what I think I really needed. It’s amazing having such a variation of people who can give daily input into the work as it’s happening.

Your last mostra here was an open studio, rather than a gallery show. Are you excited about how your work is going to look on display next to the work of the other artists?

I really enjoyed doing the Open Studio, particularly after being here only three months. In a way it stopped me freaking out because I could just think ‘my work is going to be alright, it’s going to be on the same wall from where I made it’. But I’m really glad to be showing in the gallery this time because it’s a good chance to you get some distance on your work. Usually my studio is pretty messy, the walls are covered in paint and it’s almost as if I have to cut the images out. I stop seeing them because they become part of the floor or the walls. Being in a group show is almost like a palate-cleanser, others work helps reset your viewing of the work.

Have you had any thoughts about what you want to show in the mostra yet?

I always have these ‘definite’ ideas of what I’m going to do, and I draw little images of how I’m going to hang the work, but then I’ll get down there and I’ll completely change my mind. I sometimes make the mistake of thinking that with my work everything happens when I’m painting, but in a way I need to take a couple of days at the end to stop and think about how they should be seen. I’ll probably take a selection down to the gallery and move them around until they find a home.

What are you most looking forward to about the mostra?

I think that it’s a chance to see what we all actually do, even though I’ve been living with the other artists and going into their studios daily, you don’t know what people are actually going to produce until the show. It’s a bit like being an actor and rehearsing, you don’t know exactly what it’s going to be like on stage. I think that is what is going to be really exciting!