As part of his preparations for our December Mostra, Giles Worsley Rome Fellow, Mark Andrew Kelly has been exploring how the ancient lost-wax method of bronze casting could be used to create modern sculptures and scaled architectural models.

Our Communications and Events Assistant, Katherine Paines, accompanied him and Marco Palmieri (Visual Art Residency and Programme Curator) to collect the finished sculpture and asked him what it was about this casting method that interested him so much.

The lost-wax method of bronze casting is so-called as it involves the creation of a primary sculpture in wax (or for larger sculptures, clay then coated in wax) which is encased in clay complete with small vents made from sticks of wax which form channels in and out of the refractory mold. This model is heated, causing the liquid wax to melt and escape through the vents as a gas, leaving an empty clay shell imprint into which the molten bronze can be poured. Once cooled the clay can be cracked open to reveal an exact bronze copy of the wax original, which can then be polished, chiseled and honed.

Hundreds of statues across the Greek and Roman world were made in this way, however, due to the skillful craftsmanship and the time required in the foundry, it is a method that has fallen somewhat out of fashion and is now not commonly done.

Wax is heated to pour into a refractory plaster imprinted mould. Photo by: Mark Andrew Kelly

Wax sticks visible on the outside of the plaster block, to create spaces where the wax can escape and bronze can be added. Photo by: Mark Andrew Kelly

Wax sticks visible through the top of the plaster casing. Photo by: Katherine Paines 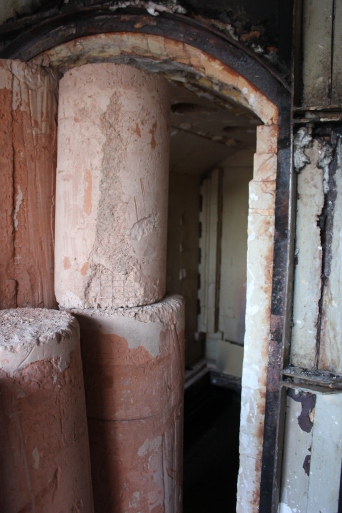 Plaster moulds containing wax figures ready to be loaded into a firing kiln where they will be heated to around 1,100°c. Photo by: Katherine Paines

Mark is an artist and registered architect currently working towards an exhibition for the December Mostra at the British School at Rome. He is looking at concrete construction in Roman barrel vaults, cross-vaults and modern lightweight domes. The motivation to consider this type of bronze casting within his work comes from his interest in the formwork required to cast 3D metal models, which is very similar to casting in concrete.

Mark’s inspiration for trying out this method comes from his residency in Rome. He has travelled extensively around Italy during his time as an award-holder at the BSR, documenting the buildings and objects he has seen in an overflowing sketchbook and regularly publishing timelapse videos of his work on his personal architectural website. Mark passionately believes that when you come to a new place, particularly somewhere as steeped in a varied architectural history as Rome, you should try out the things that you are unable to do anywhere else. Where the craft and traditions are local, you are going to come out with the best results.

Augusto, at Fondi Arte Bronzo, has been creating this type of work for over 28 years. He is seen here polishing the finished sculpture. Photo by: Katherine Paines

The cost of the raw materials and the antiquated methods used mean that it is not a commonly used method when creating sculpture. However, having whet his appetite for this here in Rome Mark is interested in potentially pursuing the lost-wax method further to produce architectural models as part of his regular practice in London. As he says, architectural models are often pricey things to produce even when they are made out of plastic and polymers, and as long as the quality produced justified the money spent it would be something he could look into – assuming of course he was able to find a workshop in England with the right equipment! 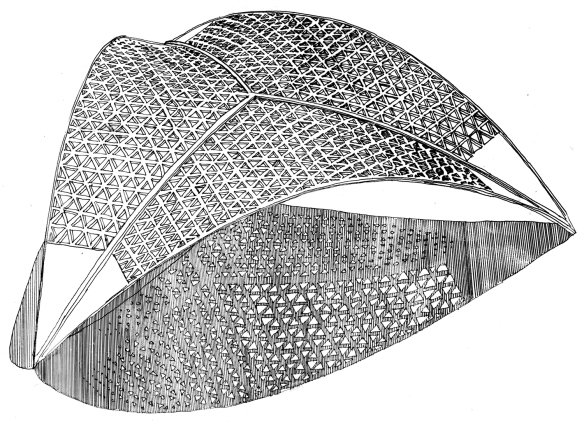 Mark was inspired by the shape of Pier Luigi Nervi’s roof structure with three parabolic vaults. Drawings and photos by: Mark Andrew Kelly 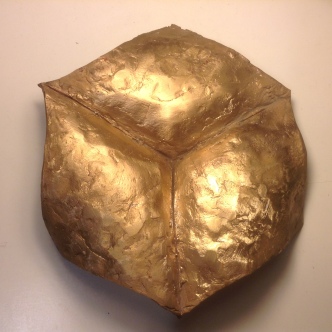 The finished product, viewed alongside a reconstructed wax model of the same, will be unveiled as part of Mark Andrew Kelly’s collection at the December Mostra at the British School at Rome on Friday the 11 December 2015.

Before and after: cast bronze metal on the left, hand-molded wax on the right (black). Photo by: Mark Andrew Kelly

Thanks must go out to Isabella Capolei, Marco Palmieri and the staff at the Fondi Arte Bronzo.

Mark Andrew Kelly’s blog, where you can find all of his timelapse videos of how he has been spending his time in Rome is available at: http://www.markkellyarchitect.com/blog/

The website of Fondi Arte Bronzo can be visited at:  http://www.fondiarte.it/index.html